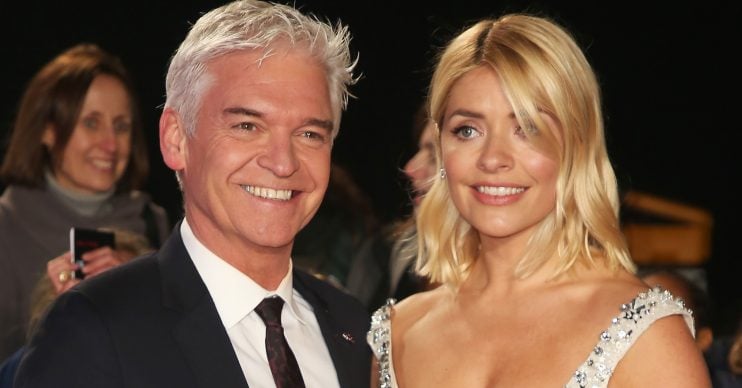 Look who's come for dinner

Holly Willoughby and Phillip Schofield have been enjoying a little family holiday in Portugal of late, and they’ve recently been joined by Declan Donnely.

Holly presented the previous season of I’m A Celebrity… Get Me Out Of Here! with Dec while Ant McPartlin took some time off the show due to personal reasons.

Holly and Phil have been making sure they enjoy the sun, the food and the booze whilst in Portugal and Phil’s been showing off his culinary skills.

Last night he took it the next level by cooking up some delicious looking BBQ ribs, and they had a very special guest for dinner.

Dec and his wife Ali Astall came along for dinner as Phil documented their evening on social media.

He posted images via Instagram Stories of him preparing the BBQ ribs – which looked delicious – and then posted a picture of the whole gang together followed with the caption: “Full of ribs.”

In the selfie that Phil took, you can see Holly with her husband Dan Baldwin (who recently celebrated 12 years of being happily married), Dec and his wife Ali, and finally Phil with his wife, Stephanie Lowe.

It certainly seems as if they all had an absolute blast, and there probably was some alcohol consumed in the evening, which explains their rather cheery disposition.

This comes after it was revealed that Holly has been overtaken as the UK highest-paid female TV presenter by Amanda Holden.

It’s now estimated that Amanda earns over £5 million a year thanks to her work on shows such as Britain’s Got Talent, and as the co-presenter on Heart’s breakfast show.

It’s been reported that she will earn roughly £1 million thanks to her position as one of the judges on Britain’s Got Talent, which will undergo a bit of a format change this year.

This year’s edition of the show, which starts on August 31st, will be rather different as it’ll see previous winners return and compete against one another.

It’s promising to be a rather big deal with the likes of Jai MacDowall, Stavros Flatley and Paul Potts all tipped to return to the programme.

Would you like to party with Holly and Phil? Leave us a comment on our Facebook page @EntertainmentDailyFix and let us know what you think of this story.