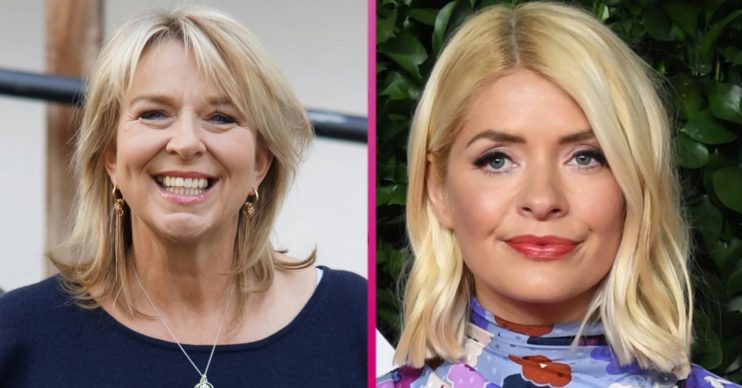 She finds Holly 'inspiring' for allegedly taking a stand

Holly Willoughby has been backed by her This Morning predecessor Fern Britton, according to the latest news.

That’s because Fern, 63, reportedly reckons presenter Holly is right to ‘make a stand’ in her ‘money row’.

Reports claim Holly, 40, is caught up in a dispute with her former agents over claims on her future earnings.

What is the latest Holly Willoughby news?

The Sun claimed Holly wasn’t happy with YMU, who allegedly tried to claim 15 per cent of her future earnings.

However, earlier this month, it was reported Holly is now in ‘crisis talks’ about her This Morning future.

And that’s because she may be gearing up for a legal battle to prevent YMU’s claims for around £200,000 per year on her latest ITV contract.

Where does Fern Britton fit in?

Fern, who was replaced by Holly in 2009 on the ITV daytime series, told a fan on social media she has experienced similar circumstances.

Fern also left YMU in 2020, according to reports. She tweeted earlier this week: “An ex-agent is asking for 10 per cent of any future earnings.”

However, an insider went even further when speaking to The Sun – and hailed Holly’s resolve.

‘Holly is a trailblazer’

The unnamed source suggested Fern has a huge amount of admiration for Holly’s ‘inspiring’ actions.

It could lead to a female powerhouse revolution.

They said: “Like Holly, Fern was shocked that she is expected to hand over large percentages of her deals to an old agency and felt empowered to speak out about it.

“She is supportive of Holly in what she is doing. Holly has been a real trailblazer in the industry and inspired many to make a stand. It could lead to a female powerhouse revolution.”

What has Holly said to ITV?

Last week’s report claims Holly would rather leave This Morning than hand over earnings.

A source who suggested the principle was more important than the financial aspect said: “There has never been any question over commission on contracts that they concluded – this is about what happens moving forwards now that they aren’t involved, and them trying to handcuff her for years to come. It’s just not right.”

They added: “[Holly] has spoken to ITV execs and explained the situation – in essence, she said she’d rather leave the show than let YMU take such a high percentage of her earnings, when they aren’t entitled to it.”

However – according to the source – ITV is doing all it can to ensure the issue is settled as “amicably” as possible.

ED! has contacted a rep for This Morning for comment.

It isn’t the first time that Fern has addressed issues relating to those who work for This Morning.

She has previously claimed her own departure saw her “treated quite poorly”.

And she also got stuck in last year during speculation about the future of Eamonn Holmes and Ruth Langsford.

Fern tweeted last November: “What appalling treatment of Eamonn and Ruth by This Morning and ITV.

“They have been absolute loyal rocks to that show through turmoil and are beloved behind the scenes. Sad to see.”