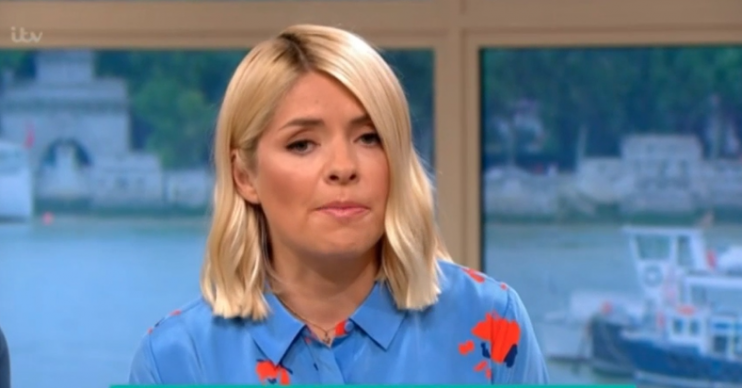 Some people even called it "frumpy"

Holly Willoughby’s dress on today’s This Morning has been compared to a tin of Cadbury’s Roses chocolates.

The presenter wore a £299 blue dress which featured a red floral print from WHISTLES with a pair of nude heels.

Holly shared a snap of herself posing in the dress on set of the daytime show, alongside the caption: “Morning Thursday… today’s #hwstyle on @thismorning dress by @thisiswhistles.”

Many people loved the look, with one person writing: “Looking super fabulous today.”

Another said: “Love this dress,” while a third gushed: “You look stunning!”

However, others weren’t so keen and compared Holly to a tin of Roses chocolates.

One person said on Twitter: “#ThisMorning Holly has paid hundreds of pounds on her dress to look like a box of Cadbury’s Roses.”

Another agreed, saying: “Holly looks like a tin of Cadbury’s Roses #jeremykyle #thismorning.”

Holly looks like a tin of Cadbury’s Roses #jeremykyle #thismorning

Others thought the dress made the star look “frumpy”.

One person said: “Very frumpy!” while another wrote: “You look amazing in anything but I think this is a bit too frumpy for you!”

You can buy Holly’s dress here.

Earlier this week, Holly was praised for paying tribute to the Duke and Duchess of Sussex’s new baby son with her outfit for the show.

Meghan and Harry became parents for the first time on Monday as they welcomed a little boy, Archie Harrison, into the world.

On Tuesday’s This Morning, Holly sported a blue lace dress from Ganni with a pair of nude heels from Gianvito Rossi.

Fans loved the look with one person commenting: “You really suit that colour Holly… beautiful as ever.”

Another wrote: “Oh wow… I just love this colour, you look absolutely fabulous in this Holly,” while a third added: “Wow that’s a lovely dress, in keeping with the royal baby.”

What did you think of Holly’s dress today? Let us know what you think by leaving a comment on our Facebook page @EntertainmentDailyFix!