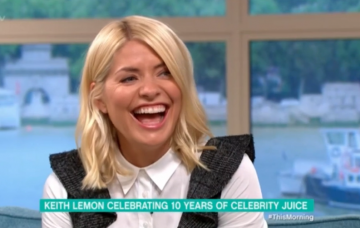 She hid her face in her hands

Holly Willoughby brushed off questioning on whether she’ll be paid the same as Dec Donnelly when they co-host I’m A Celebrity… Get Me Out Of Here! later this year.

It was confirmed last month that the presenter will be jetting off to Australia to fill in for Ant McPartlin on the reality show, as he takes the rest of the year off to focus on his recovery.

During Wednesday’s This Morning, Holly was left squirming as her Celebrity Juice co-star Keith Lemon grilled the presenter on her pay packet.

As Keith appeared on the show to talk about celebrating ten years of Celebrity Juice, he was curious to know more about Holly’s new jungle stint.

Keith and Phillip Schofield were quick to tease Holly over how many episodes of This Morning and Celebrity Juice she’ll miss because of her new job.

Keith asked Phil: “Are you vexed?” to which Phil replied: “No, I think it will be the best telly to watch.”

Phil then asked Keith: “How many shows is she missing with you?” to which the comedian said: “In total, four. I’m a bit vexed but I’m keeping it calm.”

Phil quipped: “Oh four shows. I don’t have a piece of paper big enough to write down how many [she’s] missing on here!”

Keith then asked Holly: “Are you getting paid the same as Dec? Equal rights and stuff!”

Clearly surprised by his question, a blushing Holly smiled and replied: “I should hope so.”

Playfully hitting Keith with her script papers, she added: “You’re a naughty boy!”

Keith continued to grill Holly, asking: “How much you getting?” to which Holly exclaimed: “I don’t know!”

After teasing Holly, Keith went on to praise the presenter saying she’s the “perfect person” for the job.

He said: “I think she’s the perfect person for the job, I’m really excited.

Holly, 37, released a statement last month saying she couldn’t be more excited to be co-hosting the show with Dec.

During an episode of This Morning earlier this month, Holly told Phil that she spent the summer organising the “logistics” of her move to Australia.

She also said her children will be coming with her, which means she’s been speaking to their schools about how that will work.