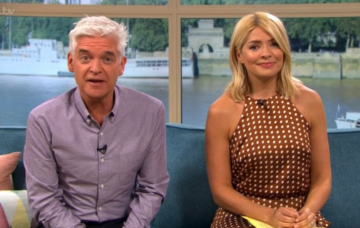 She couldn't contain her excitement!

Major Outlander fan Holly and co-host Phillip Schofield sat down to chat with the actor to talk about the upcoming series of the time-travel series.

As Phil sat back and let Holly have her moment, the presenter delved right in to ask the Scottish star, who plays Jamie Fraser in the series, all the important questions.

Introducing Sam to the show, Holly told viewers: “[He’s here to tell us] about all the saucy scenes and whipping his kilt off.”

“I wasn’t going to mention that at all but it’s next,” she quickly added, as Sam said: “Great.”

“It’s so lovely to finally meet you!” Holly gushed.

Phil then sat back with his arms crossed leaving Holly to chat to Sam, before Phil turned the conversation to whiskey.

Sam replied: “I thought I could smell something. I thought it was me!”

“It’s Holly’s breath,” Phil joked. “She had to have one to calm her down before you came on.”

The trio then enjoyed a glass of whiskey before continuing the interview.

As the interview came to an end, Phil offered to take a snap of Holly and Sam.

“Right, jump up the pair of you,” Phil said, as Holly rushed to stand next to the actor.

“Aw, thanks!” Holly gushed as she gave the biggest grin.

Viewers were left in hysterics over Holly’s reaction to Sam. 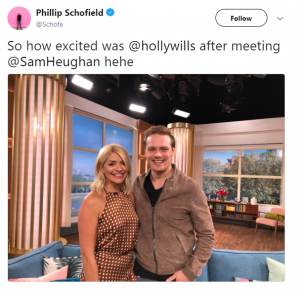 One person tweeted: “[Holly] was like a child in a sweet shop!” while another added: “Love watching Holly fan girl over Sam. To be fair he is an absolute dream.”

“Wonder who was more excited?” a third wrote. “Holly seeing her idol or the fact [Sam] made Holly go all giggly at his mere presence.”

Who is your ultimate crush? Leave us a comment on our Facebook page @EntertainmentDailyFix and let us know what you think!