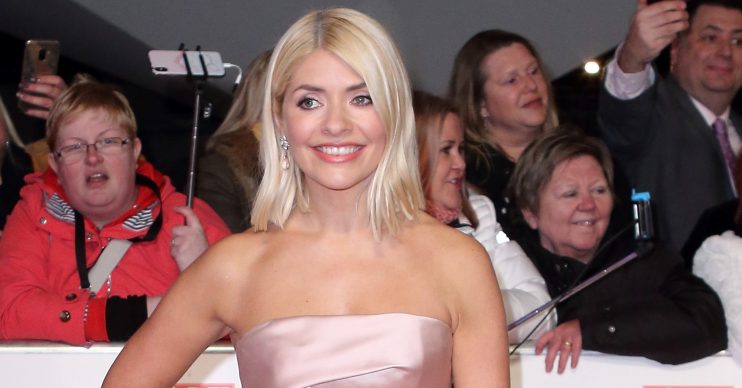 She's enjoying her half-term break with her family

TV’s Holly Willoughby has declared her love for her husband Dan Baldwin after an emotional Dancing On Ice show.

On Sunday night, Holly and co-star Phillip Schofield became choked up as they paid tribute to late TV presenter Caroline Flack, who tragically took her own life at the weekend.

In the wake of the devastating news, Holly has taken to Instagram to show love to her husband as she enjoys a break for half-term.

She shared a Boomerang clip of herself and Dan sharing a kiss.

Holly wrote: “And I love you.”

At the weekend, Holly paid tribute to Caroline on Instagram as she called the news “utterly heartbreaking”.

Alongside a black-and-white image of the pair, Holly said: “Utterly heart breaking… life is so precious and yet so fragile… huge love to Caroline’s family.”

During last night’s Dancing On Ice, Holly and Phil took a moment to pay their respects to the Love Island presenter.

Phil said: “Welcome to Dancing on Ice. We’d like to begin tonight’s show by taking a moment to remember Caroline Flack in light of yesterday’s awful news.

“We wanted to say that our hearts go out to her family and friends,” as he became teary.

Holly added: “Many of us here knew Caroline as a friend and we’ll all miss her enormously. As Caroline herself recently posted, ‘in a world where you can be anything be kind.'”

Utterly heart breaking… life is so precious and yet so fragile.

Phil had said on Instagram on Saturday: “You poor, poor darling girl, my heart is breaking for you.”

Tributes have poured in on social media following the news of Caroline’s tragic death.

Her family said in a statement at the weekend: “We can confirm that our Caroline passed away today on the 15th February. We would ask that the press respect the privacy of the family at this difficult time.”

Sunday night’s episode of Love Island was also pulled from the schedule with ITV confirming it will return on Monday.

An ITV spokesperson said: “After careful consultation between Caroline’s representatives and the Love Island production team and given how close we still are to the news of Caroline’s tragic death we have decided not to broadcast tonight’s Love Island out of respect for Caroline’s family.