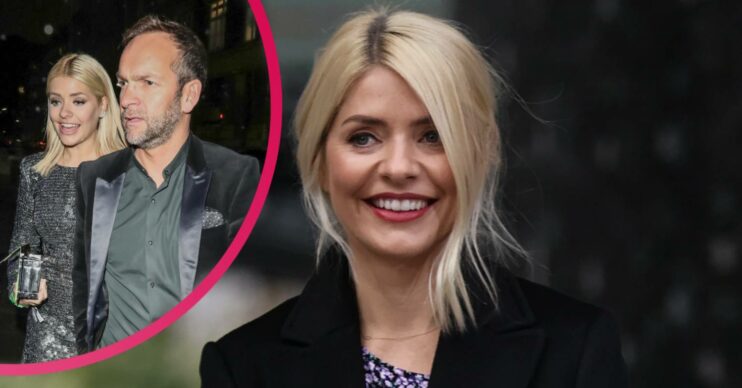 Whatever gets you there!

Holly Willoughby hasn’t just managed enviable success in her career, but also in her lengthy marriage to husband Dan Baldwin.

During her This Morning break for the summer, Holly, 40, will celebrate her 14th wedding anniversary with partner Dan.

But what is the winning formula that keeps their marriage going strong year after year?

According to Holly her love of a little kink in the bedroom doesn’t do romance any harm.

She previously told the Daily Star: “I love wearing new shoes during sex – and not just because it’s kinky.

“I’m not a foot fetishist or anything, and I do enjoy saucy games with my hubby, but I have found the best way to break in new shoes is to wear them during sex.

“It’s become a sort of rule whenever I get a new pair of shoes. I always wear them in the bedroom – during the sex act – before I take them outside.”

She added: “Every girl loves a new pair of six-inch heels and I’m no different.”

Holly also confessed that she and Dan, 48, “fancy the pants off each other,” and are very grateful for what they have.

She said: “I always say to Dan we’re very lucky – we’ve got each other, family, a lovely home. He’s got his own production company, which is hugely successful… We’re very lucky, that’s for sure.”

Holly has often spoken about the strength of the couple’s romantic relationship.  She admits honesty and respect is the foundation of their happiness.

She explained: “We’re very honest with each other, we listen to each other. I love him and he loves me. We respect each other and we probably drive each other round the twist. But we give each other space for that as well.”

An insider close to the couple told The Sun that despite their age difference, working in the same business and their differing roles just worked for the couple and made them “click”.

They revealed: “The relationship works despite the age difference because Dan’s always been there to act as a guiding hand to Holly and give advice on her burgeoning career.

“She was quite young when they got together and had just landed her first big job, while he was already an established producer.

“But it just clicked because they were in the same business, albeit on different sides of the camera.

“Her success means she has the higher profile in the media, while he’s always appeared to be the more serious one behind the scenes.”