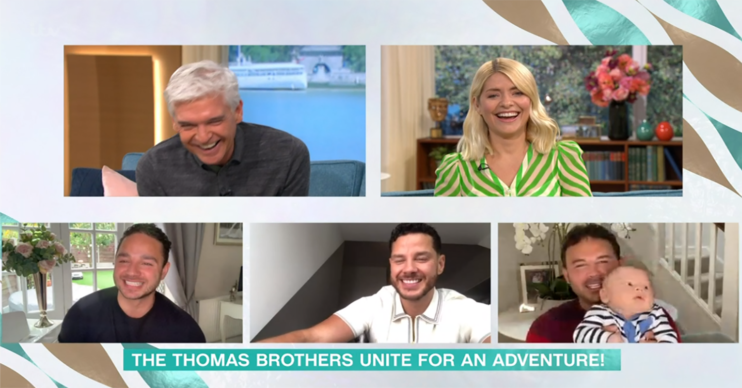 His little boy is eight-weeks-old

The star appeared on the show alongside his brothers Adam and Scott to talk about their new show, Absolutely India: Mancs in Mumbai.

But host Holly Willoughby was left gushing as Ryan’s little boy made an appearance via video link.

Read more: This Morning viewers ask why Holly Willoughby went to work dressed like ‘a Twister’

She asked the new dad: “Ryan you’ve got the baby that’s keeping you and Lucy [Mecklenburgh] busy!”

Ryan replied: “Yeah very much so. If he starts screaming in the background, you’ll have to deal with that.

My brothers haven’t even met my son yet.

“My brothers haven’t even met my son yet. Oh here he is, do you want to see him?”

Lucy Mecklenburgh is seen passing little Roman to Ryan as everyone gushed.

Ryan asked Lucy: “How old is he now?” to which Lucy said: “Eight weeks,” as she playfully hit Ryan.

Another wrote: “Such a bubbly, lovely family,” while a third added: “This is so great!”

Ryan became a dad for the first in March when his fiancée Lucy gave birth.

Ryan and Lucy got engaged in Italy back in June last year.

Alongside a backdrop of an evening meal against Italy’s stunning Positano shoreline, Lucy and Ryan were seen embracing each other as she showed off her ring.

Ryan is also a dad to his daughter Scarlett, 11, from his relationship with ex Tina O’Brien.

The former Coronation Street star shared the moment Scarlett met her baby brother after having to wait due to the coronavirus pandemic.

Alongside a photo of Scarlett holding Roman, Ryan said: “Been waiting for this moment, finally got all my family together.”