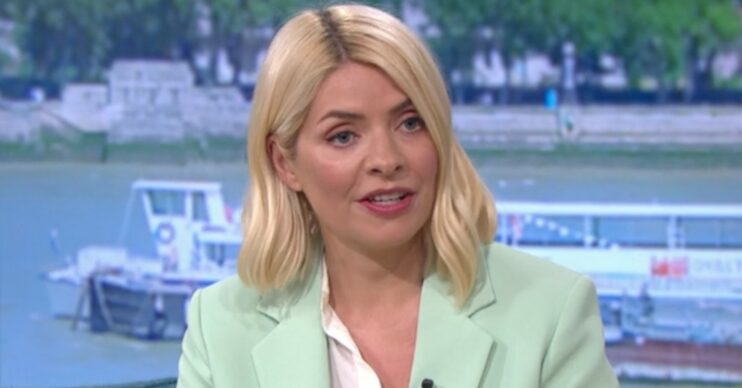 The presenter looked gorgeous in mint!

Holly Willoughby put on a leggy display in a short suit outfit on This Morning on Thursday (June 10).

Showing off her outfit on Instagram today, the presenter looked incredible as she modelled a mint set from Sandro.

Meanwhile, the look, which Holly teamed with a white blouse and nude heels, proved popular with her followers.

Standing backstage at This Morning, the star flashed a smile as she posed for her daily #HWStyle shot.

The high waist shorts also feature pleats on the front.

Captioning the outfit pic, Holly wrote: “Morning Thursday… today on @thismorning we have the original 1966 batmobile in the studio, see you at 10am.

One said: “This suit is DREAMY.”

Another added: “This suit looks insane on you. I love it.”

A third wrote: “Loving this colour on you Holly.”

Furthermore, others were thrilled to see Holly’s leggy look.

Another fan shared: “About time you got your legs out!”

The white and blue striped design from Monsoon featured a pretty collar and puffed sleeves.

And the fashionable outfit received just as much praise at the time.

In her personal life, Holly is currently in the midst of a legal battle with her former managers.

Management company YMU claims it is entitled to 15% of Holly’s pay as part of a sunset clause after representing her for 13 years.

However, the presenter is refusing to hand over a chunk of her money.

Now, it’s believed ITV are worried the star will walk from This Morning if the dispute isn’t resolved in her favour.

A source told The Sun: “Holly’s YMU row sparked some serious worries at ITV as they know how adamant she is that she shouldn’t have to pay them.

“They are hoping the situation can be amicably resolved – but they have agreed a last-resort plan to up her salary if it was to reach crisis level.”

Holly has presented alongside Phillip Schofield on the programme for 12 years.