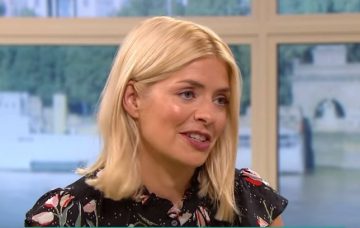 She apologised to Dan Baldwin on This Morning after letting a secret slip!

Holly Willoughby has apologised to husband Dan Baldwin after joking she might have “ruined” his new TV show!

The 37-year-old reeled off a fun fact about pirates on Thursday’s episode of This Morning, before admitting she’d only learned the fact because it’s featured in Dan’s as-yet-aired new project.

Er, which means she may well have let slip a secret!

Phillip Schofield, 56, encouraged Holly to tell viewers the fact after she dazzled him with it during a break.

Holly replied: “The fact is, do you know why pirates wear patches on their eyes? When they were having pirate fights on ships, and battles, they’d have to run from top to bottom deck really quickly.

“It would be sunny on top deck and really dark down there, and their eyes couldn’t adjust for them to see.

“So it wasn’t because they’d lost an eye. It was because when they had to go to the lower deck, they could lift their patch up and that eyeball would be adjusted to the light.”

Clearly proud of herself, Holly quipped: “Thank you very much. I’m here all morning!”

An astonished looking Phillip replied: “Where did you get this from?”

Holly explained: “It’s actually for a show my husband is doing and I think I’ve just ruined one of the facts that will be on that show. So, sorry Dan, about that! But it’s a good fact, isn’t it?”

The star’s husband Dan is a successful TV producer who has worked on shows including Celebrity Juice, which boasts Holly as a team captain.

Did you know Holly’s fact about pirates? Leave us a comment on our Facebook page @EntertainmentDailyFix and let us know what you think!