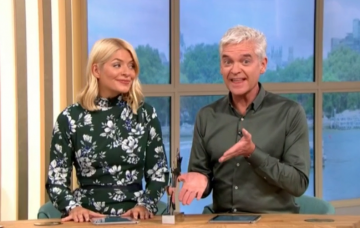 She said she almost didn’t make it to the stage

Holly Willoughby suffered an unfortunate accident during the TV Choice Awards on Monday night as she got her finger stuck in her bag.

During Tuesday’s This Morning, Holly and her co-star Phillip Schofield, 56, opened the show by thanking viewers after the show received the Best Daytime award.

Posing alongside their trophy, Phil said: “We’d like to start by thanking you for this! It’s our TV Choice Award.”

He continued: “It’s always such an honour to receive this award because we know that it’s voted for by people who read TV Choice, so thank you so much for everyone who voted for us. And it’d be rude not to show you our winning moment.”

The show then played the moment Holly and Phil accepted their award during the ceremony.

During their speech, Phil pranked I’m A Celebrity… Get Me Out Of Here! co-host Holly by saying there was a fly in her hair making Holly jump.

He laughed, saying: “One little fly she thought she had in her hair then… and she’s going to Australia [for I’m A Celeb].”

Returning to the studio, Holly spoke about the moment Phil pranked her.

She said: “I love it how you use it as an opportunity just to do that to me again. This is just a thing that’s going to continue now isn’t it? So unfair!”

Phil added: “What I like to think is that I’m actually knocking off those sharp edges of your fear… I’m helping you!”

Phil went on to reference Holly’s accident earlier in the evening.

Holly said: “Before that I actually almost didn’t quite make it to the stage because I managed to get my finger stuck in my handbag… so obviously Phillip is the person to help me, but instead of actually helping me get my finger out of my bag, he whipped out his phone and caught the moment on camera!”

A video from Phil’s Snapchat then played, showing Holly struggling to pull her finger out of her bag handle while Phil laughed in the background.

Holly told viewers: “It was like a ring and I had got it wedged… [my finger] was going purple on the end!”

Phil said: “It was proper stuck!”

But this isn’t the first time Holly has experienced a fashion faux pas.

She revealed: “I’ve had so many… the time at Number 10 [Downing Street] was a big one, that was when the zip went on my dress and I was stuck in the loo with no phone, because you have to give it in to security.

Holly went on to recall a story from when she was at school, in which she got off a trampoline in her gym kit and her gym pants “got caught on the spring” and she was left “dangling”!

She added: “It was lucky I went to an all girls school because they had to cut me out. So it’s happened for a long time, those moments!”

Have you ever suffered from a wardrobe malfunction? Leave us a comment on our Facebook page @EntertainmentDailyFix and let us know.