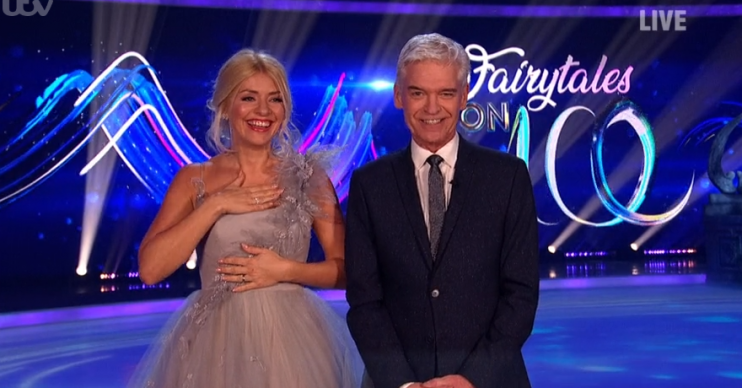 She had a near-miss thanks to a camera

A wardrobe malfunction was narrowly avoided on last night’s Dancing On Ice as a camera nearly ripped Holly Willoughby‘s dress off.

Viewers saw Holly collapse into giggles as Phillip Schofield tried to calm her.

“We’ve got a camera round our feet, I’m so sorry,” he said, looking shocked as the camera appeared to come out of nowhere towards the pair.

“This camera just whizzed past my foot and nearly ripped my dress off!” Holly exclaimed.

Loud gasps in the studio had viewers worried for a second.

Perri Kiely and his dance partner Vanessa Bauer had just received the first 9s of the series from judges, and got a standing ovation.

But when everyone saw the presenters laughing they realised danger had been averted.

This Morning viewers are used to seeing the pair get the giggles. They once couldn’t stop laughing after Phil shared his belief that sloths could explode if they were turned upside down.

Another time on the show, Holly got the giggles when she shared a story about the zip on her dress splitting while she was at Downing Street.

The theme of this week’s Dancing on Ice was fairy tales, with a special performance from Disney on Ice.

Tonight on @dancingonice it’s my favourite week… fairytale week 🧚🏻‍♀️ see you at 6pm on @itv dress by @sassiholford jewellery by @williamandson thank you to my glam gals tonight too… and always!!! @patsyoneillmakeup @cilerpeksah_hairstylist @angiesmithstyle #hwstyle💁🏼‍♀️✨

Holly took to her Instagram before the show to share a picture of her fairytale-themed dress, designed by Sassi Holford.

Later on, she shared a snap on Instagram stories of Dancing on Ice judge John Barrowman appearing to crawl out of the flowing skirt.

Holly’s near miss on Dancing on Ice wasn’t the only drama on the show.

It was revealed that Caprice had pulled out of Dancing on Ice, citing “a hard few months” following her split from Hamish Gaman.

What do you think of this story? Go to our Facebook page @EntertainmentDailyfix and leave your comments.