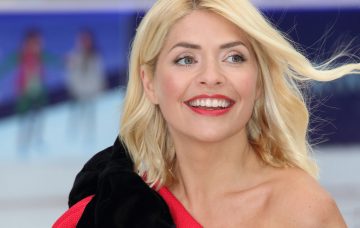 She was a hit on the show this year

Holly Willoughby has revealed she won’t be returning to host I’m A Celebrity next year.

The This Morning presenter filled in for Ant McPartlin alongside Dec Donnelly for this year’s series and became a hit with the majority of viewers.

However, speaking at the Dancing On Ice launch on Tuesday, Holly called her stint on the show “a one-off, once in a lifetime adventure”.

She said via The Sun: “It was a one-off, once in a lifetime adventure. I’ll be at home with everyone else having a glass of wine watching it.

It comes after bookies said Holly was odds-on favourite to return alongside Ant and Dec next year, with Betfair’s Alan Alger saying: “The newly formed duo are our even money favourites to present the show in 2019, with Dec’s regular on-screen partner 7/4 to make it a three-way line-up.”

However Holly’s This Morning co-host Phillip Schofield wasn’t keen on losing his “telly wife” again next year and dismissed claims of a return, insisting her role was as a “caretaker”.

He also joked to the Daily Star: “Don’t get too attached.”

Holly is set to return to This Morning next month while Dancing On Ice will return to screens on January 5.

At the weekend, ITV responded to reports that Holly may leave This Morning and triple her estimated £11m fortune with an all-new show.

According to The Mirror, a TV insider claimed that producers are looking to give Holly her own primetime programme, confident on the back of her I’m A Celebrity performance that she’ll be able to do “a fantastic job”.

Another source told the paper: “Bosses think they’ve struck gold with Holly. She has huge support.”