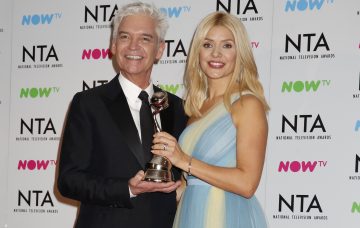 Holly Willoughby and Phillip Schofield fans are upset about the NTAs

There is a simple explanation, people!

Fans of This Morning’s Holly Willoughby and Phillip Schofield took to social media last night to express outrage over the Best Presenter award.

Ant McPartlin and Dec Donnelly took home the gong for the 17th year running, but many viewers felt it was unfair that they’re nominated together – while Holly and Phil are nominated separately.

Social media was full of complaints, with one fan writing: “They sure as heck wouldn’t win if Holly and Phil were nominated jointly!”

Another added: “Why are Ant & Dec always nominated together whereas Holly & Phil aren’t? And if they weren’t, who would win?”

A third wrote: “If Holly & Phil were nominated together they 100% could’ve snatched that, but love Ant & Dec.”

Many more insisted that if the twosome, who present This Morning and Dancing On Ice together, were allowed to be in the category as a pair, they would finally take home that trophy.

Read more: Why did Bradley Walsh crash the stage at the NTAs?!

Thankfully, others on Twitter offered an explanation, pointing out that Holly and Phil both present other shows separately, whereas Ant and Dec don’t.

One explained: “Might be because Ant & Dec ONLY work together, yet Holly and Phil do other shows on their own or with other presenters! Duh!”

And at least a few fans were just happy to see everyone was having a good time at the red carpet event, held at London’s O2 Arena.

One viewer was especially impressed with what good sports the presenters are about losing, writing: “Phil and Holly’s applause at @antanddec winning best presenter shows how genuine the two of them are. So proud of everyone tonight!!”

And at least Holly and Phil didn’t leave empty-handed: the smiling presenters took home the Daytime prize for This Morning.

Despite all the drama online, Holly seemed to have a fun night.

Although she also seemed to be having a little trouble with the wind, as she lost control of her floaty dress on the red carpet and then again later as she got in her taxi.

Read more: Why is Kym Marsh so annoyed with Dancing On Ice?

But she didn’t appear to be any worse for wear the following morning.

The 36-year-old posted a picture on Instagram ahead of Wednesday’s This Morning, showing her holding the ultimate hangover cure – ‘breakfast’ pizza.

And, who knows, maybe next year it’ll be Holly and Phil’s year!

But probably not if Ant & Dec are nominated…