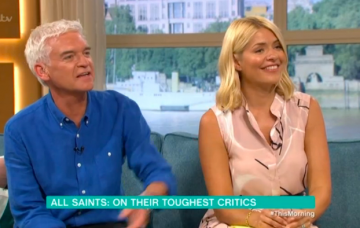 Holly and Phil’s SHOCK return to This Morning at last – for five minutes!

Oh how we've missed you guys

It’s been a long, hot summer without our favourite ITV presenters, Holly Willoughby and Phil Schofield sitting on This Morning’s sofa.

And fans reacted with shock and delight when the pair made a surprise appearance on Wednesday’s show!

Holly, and Phil – who always take the summer holidays off and are being covered by Ruth Langsford and Eamonn Holmes – had pre-filmed the segment.

It was an interview with nineties band All Saints who have re-formed and later performed songs from their new album.

Viewers reacted with confusion and delight.

One wrote: “How did Eamon and Ruth turn into Phil & Holly 😂 #ThisMorning”.

Another joked: “Ok thought I was high on no supply this morning but they pre filmed the all saints interview with Holly, Ruth didn’t do a quick outfit change 🤣🤭#ThisMorning”.

A third commented: “Eamonn and Ruth have suddenly morphed into Holly and Phil on @thismorning”.

Others lamented they weren’t back for good, with one tweeting: “Can anyone tell me what’s worse than being on ya summer holidays and not being able to watch Phil and Holly on This Morning? Heartbreaking.”

Another said: “It’s not the same without Phil and Holly. 😕”.

The married presenters made us laugh on Tuesday’s episode, when the Northern Irish star told the story of the moment he first saw his future wife.

In the segment about love stories, he asked Ruth, 58: “I believe in love at first sight, do you?”

Much as we love you, Ruth and Eamonn, it was nice to see Holly and Phil. Even if was only for five minutes…

Have you missed Holly and Phil? Leave us a comment on our Facebook page @EntertainmentDailyFix and let us know what you think.