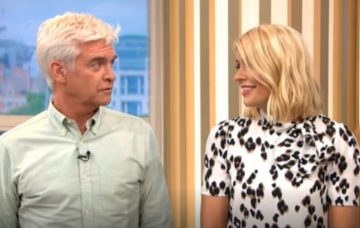 Holly Willoughby seemed rather emotional on Tuesday’s This Morning when Phillip Schofield shared a story about his daughters going off to university.

The mum of three, 37, clearly doesn’t want to think about the day when her own little ones – Harry, nine, Belle, seven, and three-year-old Chester – may flee the nest.

This Morning hosted a phone-in about “empty nest syndrome” as children start school and go off to university.

That prompted Phillip, 56, to recall when his own daughters started university, telling Holly: “I remember when Molly had already gone to university. Ruby started her first day at the same one and we took them both up to Leeds, both of us in floods of tears.

“We went to bed that night and [my wife] Steph turned on the landing light and I said, ‘What did you do that for?’ It was a bit mean of me to say it but they’ve gone, save the electricity!”

Holly has a while to go yet before her kids start university and she has to think about that!

She does know something about kids starting school, though, and she shared her advice during the phone-in with an upset woman who misses her daughter now she’s started school.

Holly told her: “They really grow in that first year of school as little people. If you’re close now and she’s your best friend now just wait until the end of the year. She’ll have come on so much and the conversations you get and the little things going on in her life you don’t know about.

Elsewhere on This Morning, Holly was left a bit flustered when the Loose Women caught her making a “rude” comment during the ads.

When the show came back from a commercial break, it was clear Holly  was struggling to hold herself together as she giggled while discussing an upcoming Great British Bake Off feature.

And the reason became clear when Holly and Phillip cut to the Loose Women studio!

Ruth Langsford joked: “We know what you’re laughing at! We heard you at the break and unfortunately, we can’t share it with people as it was far too rude Holly Willoughby and Phillip Schofield! But it was very funny. We’ve had a right old laugh in here.”

Sadly, though, we never found out just what she and Phil said during the ad break that was so rude – boo!

Did you have ’empty nest syndrome’ when your children started school or university? Leave us a comment on our Facebook page @EntertainmentDailyFix and let us know what you think!