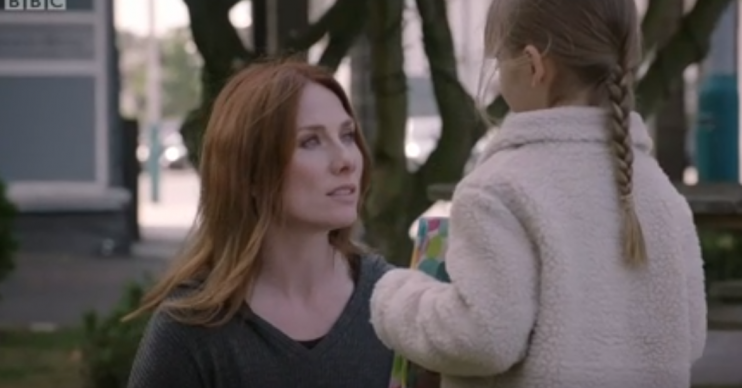 Emma lives with her dad Jonny

Viewers of Holby City were in tears as Jac Naylor reunited with her young daughter Emma.

In last night’s episode of the medical drama (January 8 2020) Jac was discharged from the psychiatric unit in Merrywell and was picked up by friend and colleague Fletch.

Fletch told her that her daughter Emma was in town for a few days but Jac could only see her whilst supervised.

However, when Jac discovered Kian was potentially planning to end his life, she went into the mountains to find him, knowing she could miss seeing Emma on her birthday.

After saving her colleague, who had sustained a leg injury, she made it back to Holby and was reunited with Emma.

Jac went up to Emma and gave her a bag with her birthday present in.

She apologised to her daughter for acting angry a couple of weeks before, and Emma said that her dad told her she was ill.

Emma said goodbye to her mum and as she walked away she opened the present – which was a drawing Jac had done of her and Emma when she was in hospital.

Seeing the picture, Emma ran back to her mum saying: “I love you too mummy.”

That moment between Jac and Emma!

Viewers were touched by the scene.

Love the scenes between Jac and her daughter Emma, tissues ready! 😢 #HolbyCity @RealRosieMarcel

I can't cry because if medication, but Jac and Emma just got me too 😥#holbycity is not the same when Jac isn't in it

Jac soon had to say goodbye to her little girl and managed to reduce Fletch to tears.

Later Jac returned to work at Holby City. Are you glad she’s back?