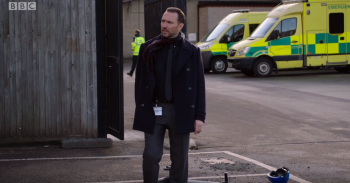 They've called him an "irresponsible parent"

In Tuesday’s outing, viewers saw protesters continue to stand outside the hospital as the court came to a decision about Holly Cartwright’s case.

After Holly had suffered with medical complications, the chances of her waking up and making a full recovery were near impossible.

Holly’s parents had taken Holby to court for their right to remove their daughter from the hospital to try an unproven medical treatment in America causing a media storm and protests outside the hospital.

However, during a press conference Ange Goddard was attacked with cold tomato soup causing Fletch to step in.

The hospital found in favour of Holby, and Ange finally persuaded Holly’s mother Ruth that letting Holly go was the right thing to do.

Ruth and Holly’s father then made the heartbreaking decision to have Holly’s life support turned off and the teenager passed away.

However, this wasn’t the end as Ange was called into Hanssen’s office and told that her personal details had been published online and with death threats made against her, it wasn’t safe for her to go home.

But Serena was concerned as to how they knew Ange was the only target – and now it looks she was right to be worried.

As the episode came to an end we saw Ange being escorted by the police to a safe location whilst Chloe and Fletch were talking outside the hospital, and Fletch’s young son, Theo, who had been in the creche that day, was playing in the car park on his scooter behind the pair.

Things suddenly became very worrying when Fletch could no longer hear his son, and found he had vanished from the car park with his scooter left behind.

Viewers were not impressed with Fletch’s parenting skills and slammed him for not keeping an eye on his child and letting him play in a busy car park.

What an irresponsible parent! 😲 #HolbyCity

Am I being cynical by saying who in their right mind would let a child ride round on a scooter in a busy car park? #HolbyCity

Fletch, with all your kids you should know… eyes on the little kid at all times. #hoby #holbycity

#HolbyCity don't think I'd let my child play on his scooter in a car park :/