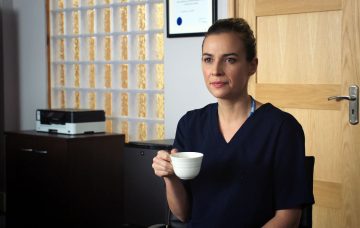 What is their story?

In tonight’s episode of Holby City Zosia gets an unexpected visitor all the way from America.

While Jac still cannot understand why Zosia decided to return to Holby abandoning her career at Yale, she’s still angry at Zosia for not telling her about her pregnancy sooner.

But it’s not long before Doctor Arlo Deane shows up to the hospital and tries to convince Zosia to return to the States.

Last week  we saw Zosia come back to Holby after over a year away. She also revealed to Jac that she was five months pregnant – after she signed her senior registrar contract.

She left to study in America back in September 2017 after she married the love of her life Ollie Valentine.

Ahead of her departure, her marriage was at breaking point – she wanted to pursue a new opportunity studying in the US, while Oliver wanted to stay behind.

After Zosia’s departure, Ollie also left Holby having been left brain-damaged in the shock shooting that killed his colleague Raf di Lucca.

The two actors met back in 2016 when Jack appeared in Holby City as a patient.

Fans of Holby City and Casualty can look forward to a two part crossover episode. The first part airs Saturday March 2 at 8:40pm on BBC One.

Holby City is on Tuesdays on BBC One at 8pm

Who do you think the father of Zosia’s baby is? Leave us a comment on our Facebook page @EntertainmentDailyFix and let us know what you think!