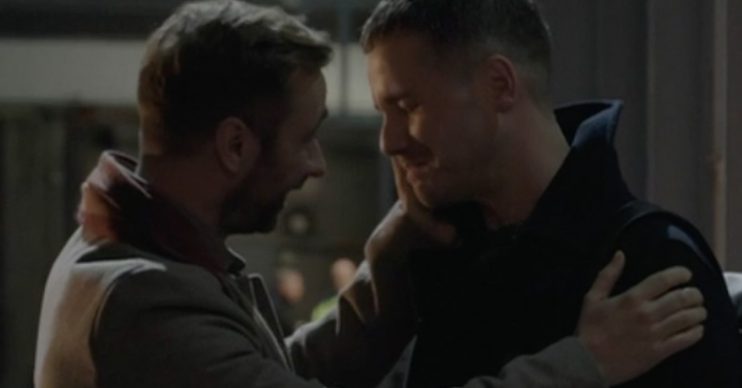 Viewers of Holby City were as shocked as Dominic Copeland was when he received a surprise kiss on tonight’s episode—hinting at the start of a possible new romance—albeit one that’s problematic, to say the least.

Dom wasn’t just shocked though, he was also obviously flummoxed by the passionate smooch, as were fans of the show.

Well, that was confusing!

It was an emotional and traumatic day for Dom after Carole turned up at the hospital and he learned she’d been under observation over the past year for antecedence, which now required “immediate surgery”.

Thankfully, Henrick Hanssen had made a return to Holby earlier that day, so he was at the helm of the “straight forward procedure”, as he described the operation to the clearly terrified Carole.

She couldn’t shake off the feeling of impending doom though, telling Hanssen, “I’ve got a bad feeling about this Henrick,” and making him swear to look out for Dom in the event she didn’t make it out of surgery.

“Bye Dazzle, I love you,” she said to her son as she was being wheeled off to theatre.

Dominic was clearly worried about the surgery, as were the legion of Carole fans on Twitter:

If Carol dies, we RIOT #HolbyCity

Blimey how much more crap are they going to pile on Dom? #HolbyCity

Given his highly vulnerable emotional state, it was no surprise that the newly single doctor was grateful to Ben Sherwood when he unexpectedly became his “knight in shining armour” by providing some much-needed support for Dom.

As Carole had suspected, the operation was a lot riskier than predicted. “There’s a bleed!’ a panicked Hanssen observed as Carole’s stats started plummeting.

Henrick was so worried that he even uncharacteristically called for help, demanding Mr. Levy immediately come to his aide.

Sacha was tied up with another operation though, so Ben stepped in to try and save the day (in addition to Carole’s life), making Dom feel even more indebted to him. However, just in time, with minutes to spare Hanssen found the source of the bleed and repaired it.

“I knew Henrick wouldn’t let me down,” Carole told Dom when she awoke. “I had the best dream while I was asleep, I dreamt you’d met a wonderful man and settled down.”

“I’ll be back in the morning, everything is going to be ok, you get some rest now,” Dom replied before tenderly kissing Carole on the forehead. “I love you, Mum.”

It didn’t take long before viewers learned that Ben’s sudden kindness towards Dom wasn’t driven by concern, he had an alternative motive, and he was more “opportunist” than “knight in shining armour”.

“It’s been a long day, can’t wait to get on that plane,” Ben told Dom as they left the hospital together. “Meeting Essie and Aisla and the airport, we’re off to Rome for a few days. Bring on the Chianti and tiramisu.”

When the emotional toll from the day finally hit Dom and he started breaking down, Ben was quick to comfort him, initially with a hug.

But things then took a shocking turn when the hug turned into a kiss, on the lips.

“Sorry mate, I just got caught up in the moment then,” Ben told a confused Dom after he pulled away.

Clearly, Dom was left feeling anything but NOT worried, as were fans of the show:

Dom totally HAS to tell Essie her Boyfriend just make a move on him right? Then she’s finally free to be with the bloke she really belongs with (After Rafe) Sacha? #HolbyCity ❤

@semadivad Wasn’t expecting that at the end of the episode! If Ben hurts my Doris, they’ll have me to deal with. #holbycity

Well, that was confusing! #HolbyCity

What did you think about the Dom and Ben kiss? Leave us a comment on our Facebook page @EntertainmentDailyFix and let us know your thoughts.