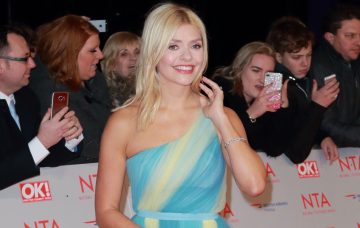 She's a proud mum of three

Holly Willoughby appeared to be feeling a tad broody last night after meeting up with pregnant pal Angela Scanlon.

The This Morning star, who has three young children, shared a sweet photo to Instagram admitting she had “bump envy” after seeing Angela’s blossoming tum.

Holly, 36, joined The One Show’s Angela, 34, and fellow television presenter Davina McCall, 50, at a photoshoot for Garnier on Wednesday.

The cute pic showed Angela flanked on either side by Holly and Davina, who were both beaming as she clutched her baby bump.

Holly captioned the snap: “One of my favourite afternoons hanging out with the #garniergals.

“Especially chatting all things baby and bump with the beauty that is Angela Scanlon. What an adventure she has before her… serious bump envy!

It’s like we are trying to get a genie out of poor @angelascanlon tummy ! Love you girls so much @hollywills ! How lucky r we? Thank you @GarnierUK for bringing us together x ( and giving us us lovely hair 😃😃) pic.twitter.com/yUB9mS5WIo

Davina shared a short boomerang clip from their catch-up to Twitter, joking: “It’s like we are trying to get a genie out of poor Angela Scanlon’s tummy!

“Love you girls so much! How lucky are we? Thank you Garnier for bringing us together (and giving us lovely hair).”

Angela, meanwhile, shared Holly’s pic to Instagram with the caption: “Day spent with my favourite hairy, fairy godmothers. At the very least TV listings are sorted for this little nugget!!! #itsthefinalcountdown.”

The One Show’s Angela announced in November that she and husband Roy Horgan are expecting their first child.

Holly, meanwhile, has admitted in recent interviews she’s torn on whether or not to expand her family.

In an interview with ITV’s Lorraine last year, she said: “I love being pregnant. I loved giving birth, weirdly, I loved all of that. So the thought of it being over – it’s like not being able to wear a wedding dress again.

“Maybe one day, I don’t know, but we’re very happy as we are. We feel complete. Three feels good for us.

“Two children was lovely but two felt like everybody was waiting for a baby.

“Chester sort of cemented us.”

In a  separate chat with The Sun’s Fabulous magazine in September, she said: “When you look around the table and you’ve got these little people you’ve made together who are just so funny, that’s when you think, ‘Maybe we should have more’.

“But that’s not a reason to have more! That’s what I keep telling myself. No, no, no! I think I’m really, definitely done. I think.

Do you get ‘bump envy’ when you’re around pregnant friends? Leave us a comment on our Facebook page @EntertainmentDailyFix and let us know what you think!