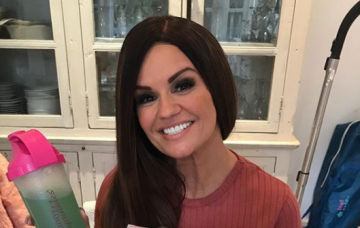 She's feeling better than ever!

Kerry Katona has made no secret of the fact she’s loving being single.

So much so, she couldn’t resist joking today that she felt a fourth wedding was in the works – to herself!

The mum of five, who is currently going through a divorce from third husband George Kay, posted a Valentine’s Day message to herself, praising the joys of being free and single.

Read more: Call The Midwife’s Helen George hits back at being called ‘massive’

She posted a quote to Instagram which read: “I have to say, I’ve been single for a while and it’s going very well. Like… it’s working out. I think I’m the one.”

Kerry added in the caption: “Happy Valentines to ME, love from Me… I feel a wedding come on!!!”

Fans were quick to comment, saying they’re thrilled to hear Kerry is in such a happy and positive mood.

One told her: “Happy Valentine’s Day hun. Sometimes it’s nice to have time on your own to find yourself again.”

Another said: “I feel the same. Good on you Kerry. Stay single as long as you can I think I am at my best when single.”

Other fans urged Kerry not to rule out finding love again, but to never settle for anything less than she deserves.

Many more joked they’d be more than happy to serve as Kerry’s Valentine if she was interested!

The former Atomic Kitten star, 37, has been single since splitting from childhood friend George last year.

They married in 2014 and have one daughter together, DJ, three.

Kerry is also mum to daughters Molly, 16, and Lilly-Sue, 15, from her marriage to Westlife singer Brian McFadden, and daughter Heidi, ten, and son Max, nine, from her union with taxi driver Mark Croft.

She recently appeared on Loose Women where she spoke about her happiness at being single and focusing on her well-being.

“This is the best head space I have been in in a long, long time, and I think being single is definitely the way forward. I’m definitely in a relationship with myself and learning to love me,” she said.

“I’ve never done that before. I’ve always ended up in a bad relationship- don’t get me wrong, I’m an old romantic who still believes in love, marriage and happily ever after, but for now it’s time to concentrate on me and my children.”

Read more: Stacey Solomon calls herself ‘selfish’ for not being on organ donor list

When asked if she’s ever had a “good adult romantic relationship”, she said: “I don’t think I have. My first marriage to Brian, I was very young, and all my relationships have been documented since the age of 17.”

Do you enjoy Valentine’s Day? Leave us a comment on our Facebook page @EntertainmentDailyFix and let us know what you think!