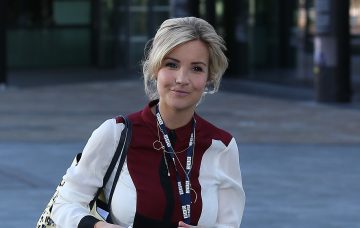 Helen Skelton says she was groped during TV interview while pregnant

She said a fellow TV presenter ensured the man was punished

Helen Skelton has recalled how a man grabbed her bottom as she presented a live TV programme while pregnant.

The Countryfile presenter told The Telegraph the incident happened years ago at a sporting event.

Helen, 34, explained: “I felt really awkward about it. I was pregnant at the time as well. I didn’t really know what to do. It’s intimidating and you don’t want to be the person who is being difficult and awkward.

“That’s just the culture that television breeds. No one wants to be difficult. You want to bring solutions, not problems. We are all ‘Happy, happy…'”

“He said it wasn’t acceptable. He kicked off and said that needs dealing with. It was handled brilliantly because of that. I’d never thought about complaining,” she said.

“I don’t want it to become my identity,” she added.

“The man in question was punished. There was a line drawn under it, and that was that.”

Helen did not name the sporting event or job.

The star is currently in training for Sport Relief’s Celebrity Boxing, which takes place on Friday, March 23.

She’ll go up against Love Island’s Camilla Thurlow in the ring.

The other bouts include I’m A Celebrity’s Wayne Bridge v Made In Chelsea’s Spencer Matthews and The Saturdays’ Vanessa White v S Club 7 singer Hannah Spearitt.

Helen’s been keeping fans updated with her training via Instagram, sharing pics as she gets ready for the match.

Coaches for the England Boxing team are getting the celebrities into shape and making sure they conform to the sport’s safety guidelines, medical procedures and regulations.

Helen told Press Association: “I thought I was relatively fit, but I was wrong. Boxing is really hard. I felt like I’d been in a car crash for three days – I could hardly move.

“The hardest part is thinking someone is going to punch you in the face or the stomach. The training I’ve been doing is just hitting someone with pads on, so they’re not hitting you back.

“And then the other day my husband just shadow boxed me and I was like, ‘What are you doing?’ And he said, ‘Well that’s what’s going to happen’.

“I’ve never been in a fight in my entire life. I’m definitely not a fighter – I’m a lover.”

“I just want to not get a broken jaw,” she said.

Helen wants the females to put on as good a show as the male contestants.

“We all bang on about everything being equal, I don’t want people to watch it and be like ‘Oh you’re a girl fighting…'” she said.

“I just want the girls to put on a good show and as much of an entertaining boxing match as the boys, because I know we’re laughing about it and doing it tongue-in-cheek and all the rest of it and it’s for Sport Relief and it’s for fun, but actually let’s give credit where it’s due.”

Helen has tried on her robes ahead of the fight and said: “I’ve never worn so much satin in all my life!”