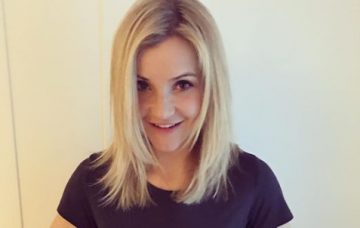 Helen Skelton pokes fun at claims about her ‘risque’ outfits

Helen Skelton has laughed off claims she’s won’t be part of the BBC’s forthcoming Commonwealth Games coverage because of her skimpy outfits.

The 34-year-old mum-of-two shared a picture on her Instagram account which read: “My boss told me to dress for the job I want, not the job I have. Now I’m sat in a disciplinary meeting dressed as Wonder Woman.” 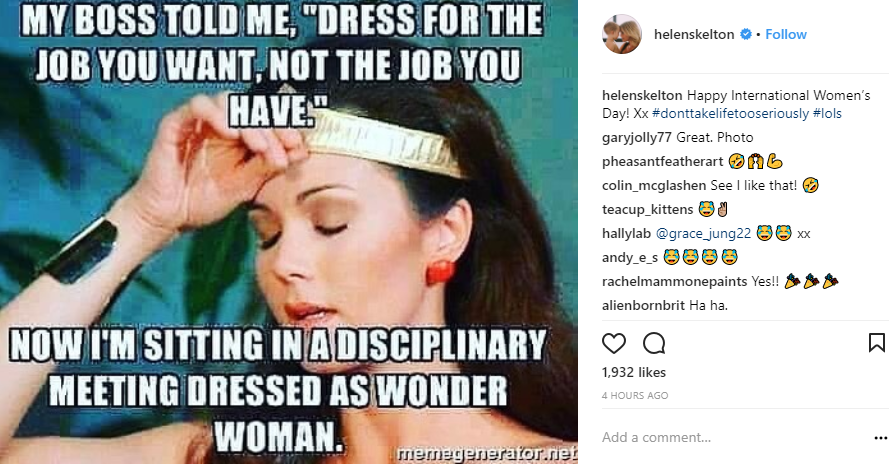 She shared the same image on her Twitter account where she wrote: “LOLS @Sonjamclaughlan @lambsenglish good job we don’t take life too seriously Sonja.”

This was in response to fellow BBC presenter Sonja McLaughlan tweeting her outrage over suggestions Helen wouldn’t be part of the Games coverage because of her clothing.

She wrote: “BBC taking small team to CWG to save money. It means I’ve been ‘axed’ as well as I’m not going for first time since 2002. ”

It was alleged earlier today that “risque Helen” had been dropped from the BBC’s presenting team “after controversy over her revealing outfits.”

But her spokesman told ED!: “She hasn’t been axed over her outfits, in fact she’s not been axed from anything, she was part of the Olympic presenting team but isn’t part this time of a smaller Commonwealth Games presenting line up.”

Read more: Phillip Schofield told to “stop giving away secrets” on This Morning

A BBC spokesman echoed these sentiments when they explained why the Countryfile presenter would not be helping them cover the Commonwealth Games from the Gold Coast in April.

Their spokesperson said: “We are sending a considerably smaller operation to Australia than to previous games. Helen remains a key presenter.”

The comment came in response to allegations not all viewers had liked the former Blue Peter presenter’s attire when she’d fronted the swimming coverage from the 2016 Rio Olympics.

Helen previously told the Mail On  Sunday she relished the chance to dress up at the Rio Olympics as it came after she’d been a stay-at-home mum to her first son, Eric, with her husband Richie Myler.

At the time the family were living in France as Richie was playing for French team Catalan Dragons.

She said: “When I was asked to go to Rio for the 2016 Olympic Games… I got a stylist to send me a selection of outfits and heels. All I wanted when I got to Rio was to dress up. Swimming pundit Mark Foster used to laugh at me because I wore high heels everywhere, every day.”

The presenter, who also now has another son, Louis, added: “If you want to look glamorous, you can’t do it with baby sick down your front. You have to give yourself time and space.”

Would you like to see Helen presenting at the Commonwealth Games? Leave us a comment on our Facebook page @EntertainmentDailyFix and let us know what you think!