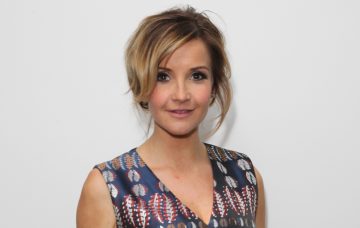 Helen Skelton hits back at critics of her charity boxing match

She delivered a knockout blow to negative comments

Up-for-anything TV presenter Helen Skelton has reacted to criticism from Sport Relief viewers after her charity bout on Friday night.

And Helen ended up winning the belt in a straight victory over her counterpart in blue.

But after some comments suggested it was distasteful to see women box one another, Helen lashed back.

She wrote on her blog: “I boxed. I won and I am proud of it. Yet a guy, not less than 24 hours since I stepped out of the ring has just said to me: ‘I don’t think it’s right women Boxing. Weren’t you a bit aggressive?’

“I owed it to my coach Phil Sellars and to England Boxing to go in that ring and do my best to try and do the sport justice. My opponent Camilla Thurlow and I ‘went for it’ because that’s what we signed up for.

“She’s too accomplished and too competitive to ‘go easy’ on. She’s one of the most game women I have ever encountered, that fireball didn’t back down. Time and time again she came back and I have the black eye to prove her right hook was loaded. Serious respect Ms Thurlow.”

During the bout, some fans had taken to Twitter to comment on what they thought was slightly unsavoury broadcasting.

Helen was unhappy at some of the comments, and said in her blog post that she was proud to showcase female boxing in a high-profile way, in an event which has so far raised tens of millions of pounds.

She continued: “It was a boxing bout and we all knew what was involved. There is a huge team of people who make these things happen: England Boxing, Sport Relief, the BBC. There are logistics, forms and faffing around for months and months to pull these things off.

“It would have been utterly disrespectful of me to do anything other than give 100 percent. More importantly it would have stuck two fingers up to the girls and coach’s who slog their guts out in gyms up and down the country, sweating and bleeding for a sport they love.”

Other viewers had nothing but praise for Helen for being brave enough to get into the ring, and took to Twitter to offer their support.

One said: “People saying they were uncomfortable with the female boxing on sports relief last night… Jeeze get a grip they were trained, they were fully informed, they were good. You can’t march for equality then say ‘girls shouldn’t do that’.” 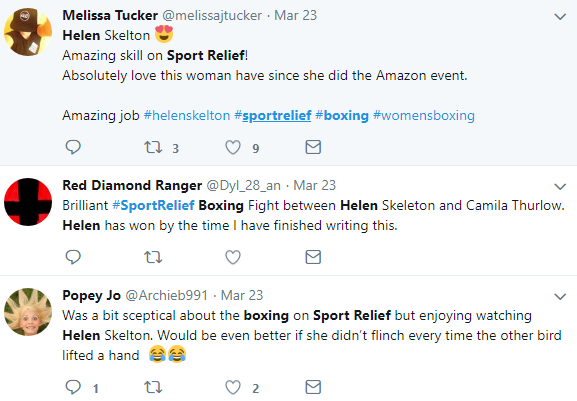 Helen certainly proved she can handle herself both in the ring and online! Remind us never to get on her bad side…

Did you watch the women’s fight? Leave us a comment on our Facebook page @EntertainmentDailyFix and let us know what you think!