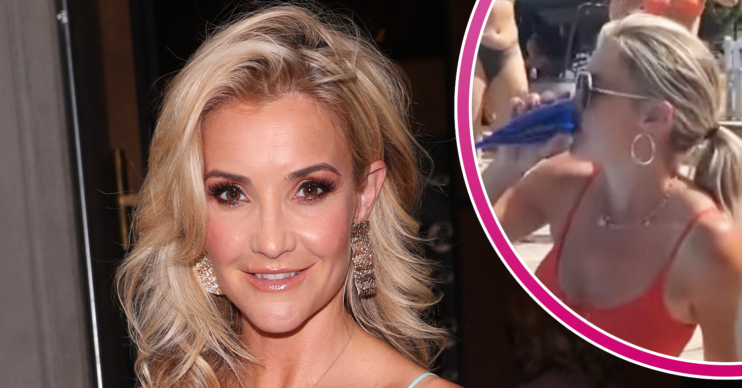 One way to beat the heatwave!

Helen Skelton looked red hot as she stripped to a sizzling scarlet bikini at a pool party over the weekend.

The Countryfile presenter – who is newly single – made the most of the British heatwave weather on a day out with her pals.

The presenter, last seen in a crop top on Summer on the Farm, was at the pool with her pals.

They were celebrating the imminent arrival of her pal Harriet’s baby, hosting her baby shower at the pool.

Not sure you’re supposed to look that stunning pregnant but here we go!

A video also showed Helen and a pal sitting at the side of the pool, quaffing drinks from plastic champagne glasses.

She also told her pal: “Not sure you’re supposed to look that stunning pregnant but here we go!”

Of course, it’s not long ago that Helen – who looked sensational – welcomed her third baby.

The TV star gave birth to baby Elsie over Christmas.

Helen announced the split on social media back in April, when Elsie was just four months old.

He has moved on and is now dating his boss’ daughter.

He is dating 32-year-old Stephanie Thirkill – the daughter of his multi-millionaire boss at Leeds Rhinos.

“Helen is absolutely devastated. Now she is contemplating life without him while he has moved on with his new partner,” a source told MailOnline.

Royal Ascot – minus the bra

Earlier this summer, Helen was also spotted out and about at Ascot – much to the delight of her fans.

She was seen in a gorgeous pink jumpsuit with cutout back and keyhole detail which showed off her toned abs – and lack of bra.

One admirer said: “Helen you are absolutely to die for mate.”

Another commented: “You look absolutely stunning.”