Armchair critic said actress "should be put on a diet"

Helen George has hit back at a Call The Midwife viewer who commented on her weight on the programme, which was filmed while she was pregnant.

The TV star responded to the tweet, posted during Sunday’s episode of the drama, which said she was “massive” and that she “should be put on a diet”.

Helen wrote: “Sorry if my chins offended you, I chose to feed my baby healthily and not starve myself in a selfish act to look good on tv.”

“Would you say this to a pregnant lady’s face? You should look on pregnant ladies’ multiple chins with love, they are busy making the future.”

Helen welcomed her first child, a daughter called Wren, in September with her partner and Call The Midwife co-star Jack Ashton.

The 33-year-old actress, who plays midwife Trixie Franklin in the BBC One show, was pregnant during the filming of the current series, although it was disguised as much as possible throughout.

Her character bowed out of the series on Sunday – the troubled midwife has been granted six months’ leave of absence to sort herself out after falling off the wagon.

This was to cover Helen’s maternity leave – but she WILL definitely be back next series.

The actress has displayed a very ‘normal’ relationship with food, pregnancy weight gain – and weight loss and refreshingly finds it as much of a drag as the rest of us.

On the night of the National Television Awards, she shared a post on her Instagram, explaining that she was at home eating low-calorie soup, as she had a stone to lose. 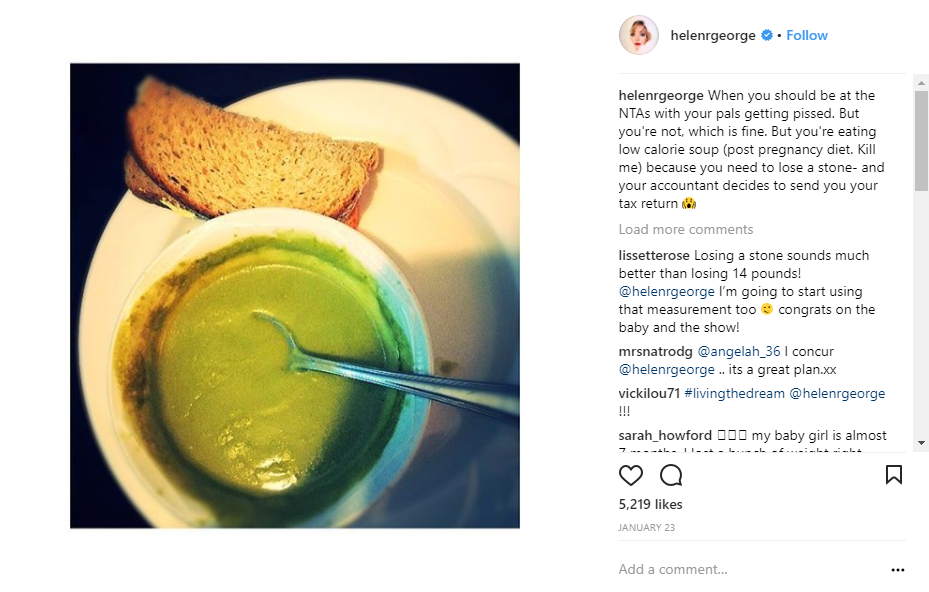 Read more: What does the future hold for Call The Midwife’s Trixie?

She completed the caption: “Kill me.” Atta girl!

Should more celebs fire back at critics? Leave us a comment on our Facebook page @EntertainmentDailyFix and let us know what you think!