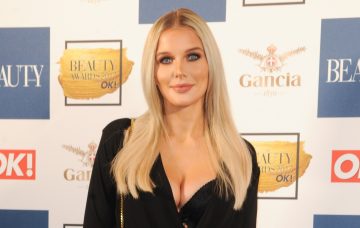 The actress, best known as the soap’s Rosie Webster, confirmed in December that she and boyfriend Scott Sinclair were expecting a second child.

And now she’s confirmed it will be another daughter!

She told OK! magazine: “We would have been thrilled if it was a girl or a boy, I’m just lucky to be able to have a baby. I will love this baby just as much as I do Matilda.”

The reason? She and Scott wanted to find out their baby’s gender together while on holiday, so they got the clinic to write the baby’s sex in a letter, which they then handed to hotel staff during a recent trip to Dubai.

Staff then arranged for a box of pink balloons to be put together, which Helen and Scott opened together over dinner, revealing a little girl is on the way!

“They put balloons in a big, decorated box which was brought into the restaurant. We unwrapped it and, when the lid came off, pink balloons floated out.”

Helen filmed her final Coronation Street scene on Friday before taking maternity leave, and has promised Rosie will go out in style!

“I’m going out in very much a Rosie style – the storyline is hilarious,” she told Loose Women, adding: “But I have enjoyed that about my character, doing comedy has been great.”

She said last week:  “It was a surprise – I’d just gone back to Coronation Street and I was really enjoying that, but obviously it’s a blessing and I feel really lucky to be expecting another baby, but it wasn’t in the plan.”

Helen’s not had the easiest pregnancy: she suffered hyperemesis gravidarium, the same extreme form of pregnancy sickness that plagued the Duchess of Cambridge.

And just this weekend Helen told fans she was once again feeling unwell.

She told fans she couldn’t present at the Scottish Entertainment Awards on Sunday night because she has pregnancy sickness in the evenings.

Fans have been wishing Helen well for her baby’s birth and saying they hope to see her back on Corrie soon.

One wrote: “Good luck with new bubba and rest, enjoy being a mummie of two and look forward to seeing you back being #dippyRosie once your maternity leave ends, enjoy every moment x (sic).”

Another said: “You will be missed. Wishing you all the very best with your maternity leave. Looking forward to seeing Rosie back soon.”

A third added: “You’ll be missed from the show. Rosie is a fab character! Looking forward to your return. Good luck to you and Scott with your new baby.”