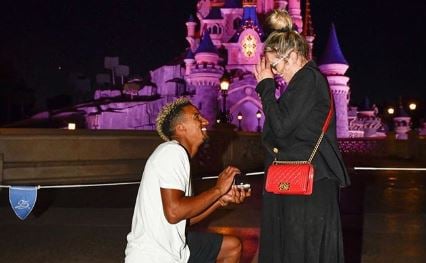 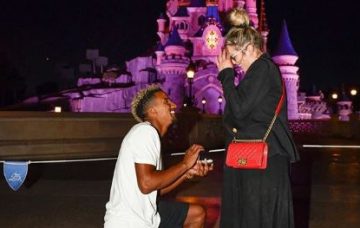 Our first look at the Corrie star's stunning ring!

Coronation Street’s Helen Flanagan has given fans their first look at her engagement ring.

The actress, who plays Rosie Webster, became engaged to footballer boyfriend Scott Sinclair when he popped the question during a family holiday to Disney.

A beaming Helen has now posted a string of photos to Instagram revealing her happiness.

In one image, she is seen holding the couple’s two-year-old daughter Matilda while flashing her engagement ring at the camera.

Her caption simply read: “Mummy and daddy are getting married!”

Pregnant Helen added the caption: “My number ones 🌎 and baby girl bump 💓 my husband to be and my two girls.”

Further photos were taken right after Scott got down on one knee in front of the Disney castle and asked Helen to marry him.

Helen is seen holding her left hand up to the camera with a huge smile on her face.

She also shared a video of Matilda watching the fireworks and light show at Disney castle, while Can You Feel The Love Tonight played in the background.

A brief close up glimpse of her engagement ring could be seen before Helen panned the camera down to show Scott had also got her a beautiful bouquet of flowers.

Naturally, the couple have been inundated with congratulatory messages from fans.

Helen and Scott have been together since 2009 and their second child, another daughter, is due in the coming weeks.

They had often been asked in interviews when they might get engaged, with Helen saying just last month she’d been dropping hints about a ring!

She told OK! magazine: “I’ve pointed Scott in the right direction for an engagement ring!

“We’ve been together for nearly nine years and we’ll soon have two kids, so it’s about time. But I want to have a romantic proposal, first of all!”

Helen added she would love to have a third child one day, but not until they tie the knot.