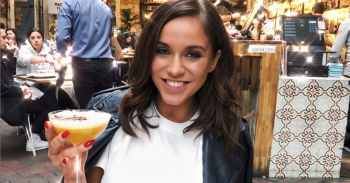 Star is said to have split from Ercan Ramadan

Vicky Pattison is said to have called it quits with boyfriend Ercan Ramadan.

A friend told The Sun the 31-year-old star is still “heartbroken” following her split from fiancé John Noble last November.

Vicky went public with The Only Way Is Marbs star Ercan just three months after her split from John, who is said to have cheated during a boys’ trip to Dubai.

Vicky and Ercan recently returned from a romantic minibreak to Budapest, but it’s thought that the reality star decided to slow things down with her beau, who now works on a building site, upon their return.

The insider said: “Vicky has decided to call things off with Ercan because it was all moving too quickly.”

They added: “She felt like it was too soon after her split from John Noble to get so involved with someone else.”

The pal did remain optimistic about the couple’s future, though. They said: “She really fancies Ercan and they are still very much friends but it’s just not the right time for a serious romance.”

The source added: “They might end up getting back together in the future.”

While Vicky has remained tight-lipped on the subject of her love life, Ercan has posted a motivational quote to Instagram which could hint at a split.

It said: “Stop chasing people. Focus on your goals and building your life. The right people will eventually find their way to you.”

When the couple initially got together, Vicky credited Ercan with putting the smile back on her face following her broken engagement.

Head over to our Facebook page @EntertainmentDailyFix and let us know what you think about Vicky’s love split.