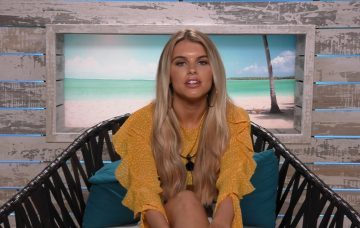 She's now back home in the UK

Love Island’s Hayley Hughes has sent a message to viewers after returning to the UK after her dumping.

The 21-year-old model has now caught up on what happened while she was in the villa and had time to read all the messages she’s received about her time on the show.

Taking to Instagram, she shared a lengthy message defending her time at the villa.

Hayley was coupled up with both Eyal Booker and Charlie Frederick during her experience, but did not find love or fall for either man.

Both accused her of acting distant with them after they coupled up, but Hayley said she wouldn’t fake a connection if it didn’t exist for her.

She told viewers: “Hi all, so I’m back with the world and I am so overwhelmed with all the support and encouraging messages I have received from you all it means the world to me! It hasn’t gone unnoticed!

“It’s especially hard when we’re in a world that tells you what it is you SHOULD want but I feel it’s essential as young women today to find out what it is WE need!

“And being true to OURSELVES and our emotions and not conforming to other people’s expectations of what it is we should do or want.

“Thank you to all who has understood and shown me great love an support. Onwards and upwards. There is no such thing as endings, only NEW BEGINNINGS.

“And so the adventure begins. Love to you all.”

Love Island viewers dumped Hayley and Charlie from the villa, after they went up against Dr Alex George and Samira Mighty in a public vote on Friday.

Both couples were voted the least compatible in the villa by their fellow islanders and unfortunately for Hayley and Charlie, 23, they were the pair sent packing.

Speaking to ED! and other media after leaving, Hayley said: “Obviously it’s sad to be the first couple dumped from the island but I genuinely know it’s not the end of the journey and I’m excited to see what comes next.”

“I genuinely do feel we were the least compatible. Obviously we were up with Alex and Samira; they were compatible, just not in a romantic way. And obviously I’ve been there two weeks and I didn’t find anyone in early days I was compatible with, so I was being true to my own feelings.”

Are you sorry to see Hayley and Charlie go? Leave us a comment on our Facebook page @EntertainmentDailyFix and let us know what you think!