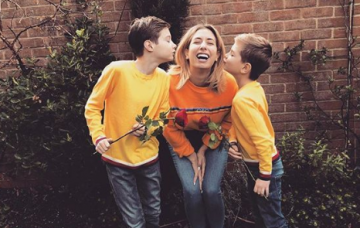 Stacey Solomon has welcomed a new addition to her family in the form of a super-cute kitten, who she introduced to fans through her Instagram Stories.

The adorable black and white moggy hasn’t appeared on Stacey’s Instagram previously, so we presume the family have just brought him/her home.

The sex or name of the kitten isn’t known, but we’re already smitten with its blue eyes!

Navigating the stairs for the first time, the kitten can be seen leaping from step-to-step while Stacey films their first steps for her followers and is heard saying, “Go on then!” encouragingly. Too sweet!

The arrival of the unnamed fur baby comes just two days after Stacey admitted to feeling so broody that her ‘ovaries hurt’, but that she wasn’t ready for a third baby with boyfriend Joe Swash.

She told the Closer magazine: “Realistically, I wouldn’t have a baby now, but I am always so broody.”

Read more: Could Stacey and Joe be planning to tie the knot?

Stacey added to Reveal magazine that it wasn’t about her desire to have a baby with Joe, adding, “It’s just the stage of life I’m at.”

Stacey, who has been dating Joe for three years after meeting on the I’m A Celebrity… spin-off show, has previously spoken about her hesitations to have another child.

The presenter admitted that she would feel an “overwhelming sense of guilt” over having three children with three men.

Joe also has a son, Harry, 10, with his ex-fiancee, Emma Sophocleous.

Stacey told Huffington Post: ” I always have an overwhelming sense of guilt that if I were to make my family greater, that I would impact on them socially and emotionally.

“There’s definitely been times in my life where I have felt the stigma of having multiple children from different partners.”

Yet Stacey, who became one of seven children after her dad remarried and went on to have another four, enthused about how an unconventional family set up could give her sons “the best start to life”.

“Life is never perfect, you just need to adapt – ultimately by doing that, you’re going to give your children the best start in life,” she said.

In the mean time, Stacey has an adorable new kitten to keep her busy. Let’s hope it doesn’t need as many night feeds and nappy changes as a newborn!

Do you feel Stacey is right about there being a ‘stigma’ attached to having children with different partners? Leave us a comment on our Facebook page @EntertainmentDailyFix and let us know what you think!