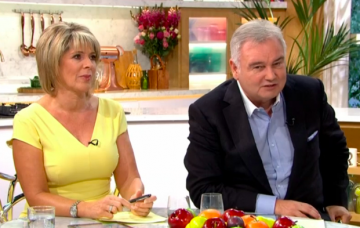 An ex-policeman says he has the killer's name

In a shocking interview on Thursday’s This Morning, an ex-police officer has claimed he has the name of TV star Jill Dando’s killer.

Speaking to presenters Eamonn Holmes and Ruth Langsford, Mark Williams-Thomas – who is now an investigative journalist – said he is determined to “finally solve this investigation”.

Jill was only 37 when she was murdered in 1999. She was shot in the head outside her home in west London, and the case remains open.

Mark was also joined on the sofa by Barry George, who was wrongly convicted of her murder in 2001. He was imprisoned for eight years before being acquitted in 2008.

Mark explained to the married presenters: “I have now been given the name of the killer and that is my focus – on that individual.”

He confirmed: “I do. And that is my focus now – to try and finally solve this investigation. Because there is no doubt that Jill was murdered, assassinated, by a professional hitman.”

“For an individual to get away with [this] for nearly 20 years… for an individual to have remained completely under the radar. The gun has never been recovered, nothing else has come into circulation. That shows you the quality of this person.”

Barry, who lived half a mile away from Jill, also spoke about the impact of his conviction.

He told Eamonn and Ruth: “I was stunned when they first read out the conviction. I ain’t even looked into it and hadn’t done any research into it. They were too quick to jump at me.”

Read more: Holly and Phil’s SHOCK return to This Morning at last – for five minutes!

In fact, the first episode of the series looked into new leads in the shocking murder of Jill.

Mark has revealed that he has managed to speak to a key witness who actually stumbled across a lifeless Jill on her porch the day she died.

She told him: “I was walking up her road and I suddenly saw her car and made a point of deliberately looking at her door, and in one step everything changed… because I saw the most horrific scene. I realised it was Jill.

“She was lying in a very strange position, and there was blood, and at first I thought she’d been stabbed or attacked in some way.

“Her hands were very blue… and the way she looked I just knew she was dead.”

Let’s hope they finally catch the person who did this. It’s about time her family got some answers.

Do you remember the horrifying news of Jill Dando’s murder? Leave us a comment on our Facebook page @EntertainmentDailyFix and let us know what you think.