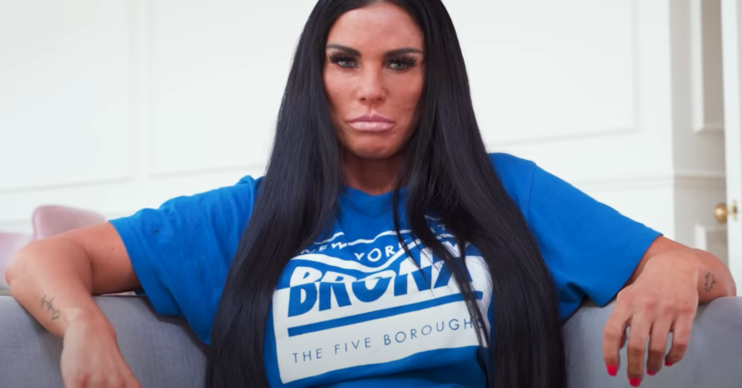 Katie Price admitted his request was 'a bit random'

The mum-of-five, 42, opens up about her time on Celebrity SAS: Who Dares Win.

However, a cameo from her son Harvey, 17, is what caught the most attention of her loyal fanbase.

As Katie shared behind the scenes secrets of the gruelling reality show, Harvey crashed her video.

He can be heard behind the camera issuing a rather unusual request.

He says: “Mum I want to go skiing tomorrow.”

A clearly perplexed Katie admits that his request is rather “random”.

However, she doesn’t stop addressing the camera and her YouTube viewers.

She replies: “All of a sudden Harvey wants to go skiing tomorrow.

She then adds: “Sorry for interrupting your questions but it is YouTube and it is what I do.”

Katie realises he means the indoors skiing facility in the midlands called Snozone.

She says: “Oh you want to go to Milton Keynes, the indoor skiing, that’s random.

“Now he wants to go skiing”

“Obviously Harvey has decided to interrupt. Me talking about going down cliffs and now he wants to go skiing.”

Indeed Katie had just been talking about how challenging abseiling down cliffs was on the Celebrity SAS.

Harvey then tells his mum he loves her and allows her to get back to her YouTube time.

The pair are currently self-isolating together in Surrey.

And her fans couldn’t get enough of Harvey’s brief appearance.

One fan wrote in the comments: “I love Harvey…I have watched him grow up through the power of media [the good parts ] there’s just something about him.

“Katie, I’m a mother myself and I think you’re an amazing mum… Love the channel, love the kids.”

Another posted: “Omg I do hope you do the show again look forward to it. Love Harvey in the background.”

A third chimed in with: “When’s Harvey’s channel gonna be up and running?… I’ll be first to subscribe.”

And a fourth agreed: “Come on bring Harvey his own channel!”

A fifth praised: “Do more videos with Harvey.”