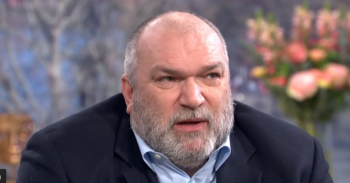 He called his experience on the show a "wake-up call"

Neil ‘Razor’ Ruddock has admitted he’s put on weight since his health scare on ITV’s Harry’s Heroes: The Full English.

Appearing on This Morning, the ex-footballer said he weighed 23 stone at the start of the two-part programme, which saw jungle king Harry Redknapp assemble a group of retired footballers to take on a German legends team.

The show was something of a “wake-up call” for Razor, 50, who was told he was at risk of having a heart attack and had to lose five stone.

But speaking to Eamonn Holmes and Ruth Langsford about his experience, he admitted he’s gained around three pounds since shooting the programme last year.

Razor, who was on This Morning with his wife Leah, said: “I think the show brought awareness to mental and physical health.

“I knew I had a bad knee anyway but I didn’t know what was happening inside.”

He added: “You think it is not going to happen to you, but I went to see a doctor in Harley Street and it was a wake-up call, really.”

But Eamonn told him it couldn’t have been that much of a wake-up call, if he’s since put on weight rather than working to lose it.

Leah said: “I worry every day, but sometimes I don’t let him know that. He thinks he’s indestructible, that’s what it is. He thinks he can carry on but he can’t.”

Neil said he’s always had trouble with his weight, explaining: “When I played football I had to be under 15 stone.”

He also said he’s now a “comfort eater” and blamed the fact that, during his professional career, he was essentially “on a diet for 20 years”.

Neil played for a swathe of top teams throughout his career, including Spurs, Liverpool and West Ham.

Did you watch Harry’s Heroes? Leave us a comment on our Facebook page @EntertainmentDailyFix and let us know what you think.