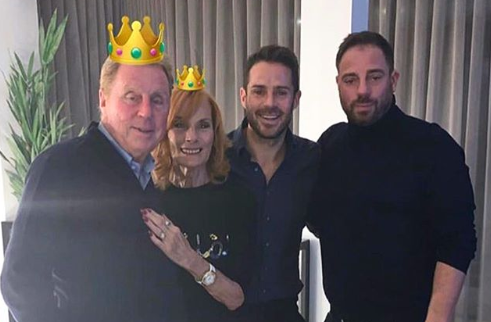 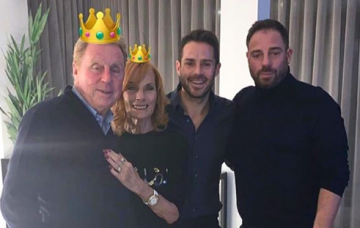 I'm A Celebrity has changed him

Harry Redknapp spoke openly in the I’m A Celebrity jungle about how undomesticated he was.

The former football manager revealed that, in 50 years of marriage, he’d never cooked or ironed – his beloved Sandra had always taken care of him.

On Christmas Day he proudly displayed a picture of himself wearing a pinny and holding up a plate of food.

And, proving he had rolled up his sleeves and mucked in, he captioned the cute pic: “Chef Hazza.”

Harry also showed off one of his presents, a pair of boots from son Mark, which he thought were better suited to a 25-year-old than a man of almost 72…

Yes or No to my new boots?!#Pengtingcalledsandra

Son Jamie also shared a sweet pic of him and brother Mark celebrating Christmas with the ‘rents, which Harry had originally posted.

Dad had superimposed crowns on his and Sandra’s heads and, referring back to the recent jungle win, Jamie joked they were taking the King and Queen thing too far!

I think they are taking this king and queen thing a bit too far …. 😂😂 thanks for a great Christmas lunch @lucyredders13 xx

Meanwhile, Harry has announced that we can all get the chance to get up close and personal to him next year.

He won over everyone’s hearts with his incredible stories in camp… and now he’s going on tour.

His post of Instagram read: “In January Harry will announce the dates and venues for his Theatre tours for 2019.

“Details of dates, venue, prices and how to obtain tickets will appear here in early January

“Merry Christmas and Happy New Year to all!

In January Harry will announce the dates and venues for his Theatre tours for 2019. Harry will appear in over 30 venues around the country between May and October Details of dates, venue, prices and how to obtain tickets will appear here in early January Merry Christmas and Happy new year to all!

Will you be going to see Harry on tour? Leave us a comment on our Facebook page @EntertainmentDailyFix and let us know!