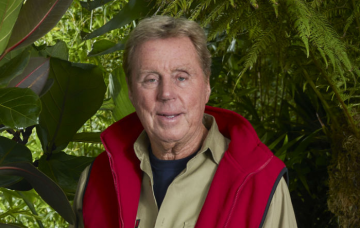 I’m A Celebrity favourite Harry Redknapp is risking piddling off campmate Rita Simons in a big way after he admitted to letting the ladies down when using the loo.

The much-loved football manager, 71, confessed to being responsible for leaving the dunny seat up – but protested he did so because he had been the culprit for a spot of spillage previously.

As Nick requested the other gents in the camp remember to ensure the jungle toilet is left how it is found after several incidents in which the female celebs ended up sitting a little lower on the throne than they expected, ex EastEnders Rita also piped up.

The jungle has been a pretty serene place so far this series, with very few cross words exchanged between the celebs.

And while she certainly didn’t lose her rag, Rita was very clear in making it known she wasn’t impressed at having to sit in “wee wee” when making a visit to the dunny herself.

Nick and John Barrowman were both quick to insist they always leave the seat down after doing their business, but the other men in the camp kept their mouths closed.

A sheepish Harry later told Noel Edmonds he was ultimately behind Rita’s unfortunate experience – and while he regretted it, it seems like he will not be apologising to her face to face.

“I was scared to tell Rita incase she bashed me up,” he said.

Hundreds of those watching  at home immediately took to Twitter to pay tribute to Harry’s humour.

“Harry’s so scared of Rita,” said another, adding several laughing emojis to their message.

And a third typed: “If Harry Redknapp doesn’t win this programme I’m writing a letter.”

Elsewhere in the camp, toilet humour was also on display as The Chase’s Anne Hegerty disturbed Nick’s sleep with her own version of the morning chorus.

Although he refused to name exactly who was responsible for the “jungle sounds” that woke him in a Bush Telegraph chap, it was clear the DIY SOS presenter was referring to his tent partner – which Dec Donnelly immediately took the mick out of by tooting on a little horn.