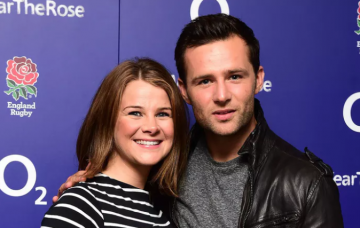 Saw raw and honest... and inspiring

The wife of McFly drummer Harry Judd has paid tribute to the musician after sharing details of the miscarriage they suffered three years ago.

Izzy Judd said her husband has been “my rock” through their struggles with fertility.

Sharing a picture on Instagram of the couple taken the day after they lost the baby, she wrote: “Thank you for all your beautiful and moving comments to my last post.

“Thank you also for sharing your own experiences, I know that by opening up we can help each other to feel less alone and I’m so grateful to the Instagram community for that.

“This photo was taken on the flight the day after we miscarried.

“I realised just how much I needed Harry, he was my rock even through his own sadness. Hold your loved ones close…

“One of my favourite quotes is ‘everyone you meet is fighting a battle you know nothing about, be kind always’.”

Judd, who is mother to daughter Lola and son Kit, previously shared the story of a miscarriage she suffered three years ago when she was six weeks pregnant.

She wrote: “On the 28th December 2014 the intense period pains began. I knew our baby was slipping away.”

She added: “The following morning I woke and the pain had stopped, I thought maybe everything was OK. Harry was downstairs making the tea when it happened.

“I just remember in desperation saying, I’m so sorry… I felt our little soul pass, a physical feeling I will never ever forget. There lying helpless, all our hopes and dreams.”

The couple have been married since December 21 2012.