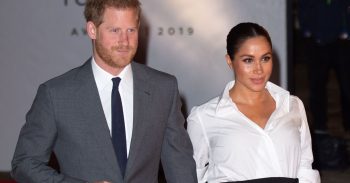 Harry and Meghan ‘could move to Africa after birth of baby’

The couple could be heading for a whole new life overseas...

As the nation waits on tenterhooks for the birth of the royal baby, a new report suggests Prince Harry and Meghan may be moving overseas shortly after the newborn arrives.

According to The Sunday Times, Harry and Meghan may be about to make a big move to Africa in newly created royal roles.

The move will apparently be in aid of promoting Britain and the Commonwealth while also creating new opportunities for the couple to continue their humanitarian efforts.

A source told the publication: “Discussions are at an early stage, but the plan is to find a new way of using their soft power abilities, most likely in Africa.”

Read more: Bookies slash odds on Harry and Meghan having a baby girl

Describing the couple as “rock stars”, the insider claimed that the palace is trying to find a way to best use the couple’s internationally celebrated status:

“There are discussions in palace circles about: how do we harness Harry and Meghan?” the source added. “How do you harness this phenomenon that has emerged? You make it productive.”

This could echo the Queen and Prince Philip’s time spent in Malta between 1949-1951, when Prince Philip was stationed there as a Naval Officer.

And while Meghan and Harry are not predicted to make the move until early 2020, several African countries are allegedly already being discussed.

Harry regards Botswana as a “second home,” Lesotho is where he spent his gap year, he has carried out extensive charity work in Malawi and South Africa is yet another option.

Palace officials are reportedly set to discuss with the government on how to pay for the proposed project, and the extensive security required.

However, a spokesperson for Buckingham Palace told Hello! Magazine: “Any future plans for the Duke and Duchess are speculative at this stage. No decisions have been taken about future roles.

“The Duke will continue to fulfil his role as Commonwealth Youth Ambassador.”

Do you think Harry and Meghan should move to Africa? Let us know what you think of this story on our Facebook page @EntertainmentDailyFix.