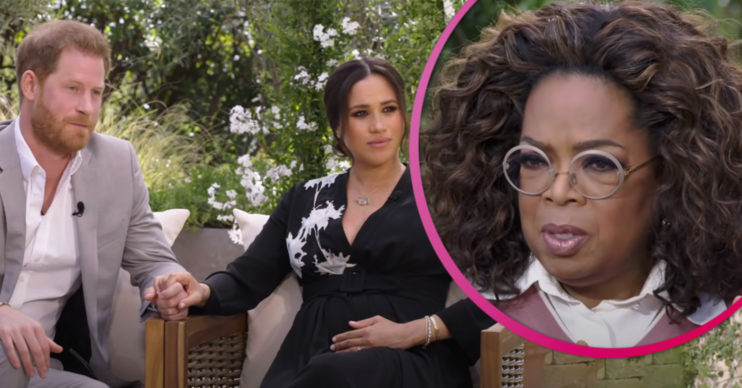 Harry and Meghan interview: The questions Oprah failed to ask that we deserve answers to

The interview unveiled a series of bombshell revelations and claims

A string of revelations and claims were made by the Duke and Duchess of Sussex during the almost two-hour special.

However, there’s still some questions Oprah failed to ask that we want to know answers to.

First up is why Meghan decided to cut her family off ahead of her wedding to Harry.

In the months leading up to her 2018 wedding, Meghan’s family members came forward to question why they hadn’t been invited to the big day.

Although Oprah did ask the Duchess about her relationship with estranged father Thomas and half-sister Samantha, she didn’t delve into why they didn’t receive an invite to the wedding.

What did Kate say to Meghan?

During the chat, Meghan addressed claims she once made sister-in-law Kate Middleton cry in the run-up to her and Harry’s wedding.

The reports, which emerged several months after the wedding, claimed the pair fell out over flower girl dresses and Kate had been left in tears.

However, Meghan claimed the reverse had happened and it was actually Kate who made her cry.

She didn’t go into details about the disagreement, insisting it wouldn’t be fair to Kate because the Duchess of Cambridge apologised for what happened.

But, Oprah didn’t ask what was actually said during Meghan and Kate’s fallout and many viewers want to know!

Meghan and Harry received a lot of criticism over their use of private jets despite their speeches on environmental causes.

The couple delivered passionate speeches on the topic and urged others to look after the environment.

However, they faced backlash after it was claimed they took several journeys via private jets during 2019.

Despite all the criticism, Oprah didn’t ask the couple what they thought of the backlash and it wasn’t even brought up in conversation.

Did they lose several members of staff, including nannies for Archie?

There were several reports claiming a number of Meghan and Harry’s staff had quit their roles during their time as senior royals.

In addition, it was claimed a few of Archie’s nannies didn’t stick around either.

Oprah didn’t ask the couple about the reports during the interview and it seems a lot of viewers were wondering why it wasn’t brought up.

One person said on Twitter: “Did anyone notice when Oprah said ‘nine members of your staff have quit’ Meghan nodded. She didn’t disagree yet no questions were asked about that?”

During the interview, Meghan admitted she went into royal life “naively”.

The former actress also said she didn’t “do any research” about the royals or look up Harry online.

She said: “I just didn’t feel the need to, because everything I needed to know he was sharing with me.

“Or everything that we thought I needed to know, he was telling me.”

Meghan added: “I didn’t really understand what the job was. What does it mean to be a working royal, what do you do?”

However, Oprah didn’t expand on that and ask exactly why Meghan didn’t research the biggest institution in the UK.

Since they stepped back from royal life, there have been several calls for the Queen to strip Meghan and Harry of their royal titles.

Despite all the uproar, Oprah didn’t ask the couple for their thoughts on the demands and how they would feel to have their titles scrapped.

Were there any questions you wanted answers to? Leave us a comment on our Facebook page @EntertainmentDailyFix and let us know.