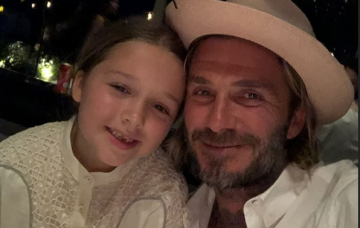 She splashed out on his 43rd birthday

She may only be six but it seems Harper Beckham gets a lot of pocket money!

The little girl was able to treat her dad, David, to a super expensive present as he celebrated his 43rd birthday this week.

The former footballer shared a snap of the gift on his Instagram Stories – a designer wine case that costs £4,950.

It came with an engraved gift tag from his daughter which read: “Daddy’s Wine Cellar, Love Harper!”

The Louis Vuitton case, made from alligator skin, contains two crystal wine glasses. It can also hold a bottle of wine – but that isn’t included in the price!

Of course, Harper’s fashion designer mum, Victoria, will have had a hand in ensuring she could give her dad the expensive gift.

The Spice Girl, 44, shared images of David’s other cards and presents from their children on Instagram, and also a sweet video of Harper wishing him a Happy Birthday.

Sitting in her school uniform with plaited hair and her back to the camera, Harper reads aloud from her handwritten card, which she’s decorated with hearts and kisses.

She says: “Dear daddy, happy birthday. I hope you like your fabulous presents. Love Harper. I love you so so much daddy.”

As previously reported by ED!, the Beckham family enjoyed a meal out in London to celebrate David’s big day – and it was there Brooklyn, 19, rather trumped his sister’s gift.

Unbeknown to his dad, he had flown in from New York, where he is currently studying photography, to surprise him.

Both David and Victoria shared videos on their Instagram accounts of the emotional moment Brooklyn crept up on his dad in the restaurant as he was eating, and gave him a big hug.

A delighted David had tears in his eyes as he embraced his eldest son and asked him if he’s OK.

Earlier in the day, Victoria had shared an image of David with their three youngest on his birthday, in which she kept up the ruse by saying how much they missed Brooklyn being unable to join them.

Later she shared videos of Brooklyn’s surprise appearance, writing: “The biggest surprise of the day…. Welcome home @brooklynbeckham X happy birthday @davidbeckham I love u so much x kisses.”

What do you think of Harper’s expensive birthday gift? Leave us a comment on our Facebook page @EntertainmentDailyFix and let us know what you think!