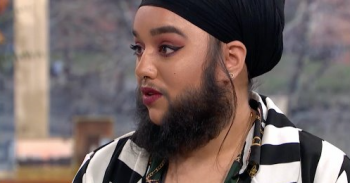 The House of Extraordinary People star Harnaam Kauer has spoken out in the hope of changing opinions about the way people look in the new reality show.

Harnaam suffers with polycystic ovaries and has developed a lot of facial hair as a side effect.

The Channel 5 series she is featuring in will follow the lives of people dealing with unusual conditions.

She talked on This Morning today (18 March) to insist the new series isn’t a ‘freak show’.

The 27-year-old told host Holly Willoughby and Phillip Schofield: “I’ve gotten to the stage where I am confident. I need to go to this house to make other people confident. I want to add value. Help people become more confident. Just because we look different doesn’t mean we should be treated differently.

“Some people will be interested, because who sees a bearded lady. But there are going to be some people who are going to mock it. But it takes a strong person to come out and say this is who I am.”

Read more: Susanna Reid ‘ups security in her home after two burglaries in a month’

Harnaam, who is now a motivational speaker and activist, added: “I’ve seen people call it a freak show, and I’m thinking ‘Don’t call me that’. We are not freaks we are people, we have high self esteems and we are going to live life amazingly.”

She was joined by co-star Rachael who suffers with the condition neurofibromatosis, which causes tumours to grow on nerve tissue.

Both women admit they have suffered abuse from cruel bullies over the years because of their appearance.

They said they now want to spread awareness for other people who may be marginalised.

Read more: Emily Attack hits back after being criticised for new Blondie role

The new show will document nine people living in a house in Yorkshire for 10 days, to shed light on the prejudices they face with their differing conditions.

The programme airs tonight on Channel 5.