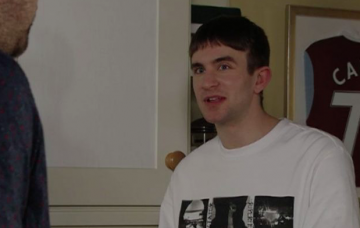 EastEnders: Halfway exposed as a “liar” as brother Stuart arrives to cause trouble

Is Halfway a hero or is he lying?

Stuart Highway arrived in Walford with a bang this week – immediately causing trouble for his brother Halfway and his old mate Mick Carter.

And the cocky character divided viewers watching at home, as well as residents of Albert Square.

While Mick was thrilled to be reunited with his old drinking buddy, his wife Linda was clearly peeved to see Stuart again. Halfway didn’t look too happy to have his big bro around either!

After prankster Stuart was revealed to be Mick’s mystery attacker, the pair settled down to toast their many years of friendship in The Vic.

And, as they proceeded to get more and more drunk reminiscing over old times, Stuart and Halfway’s prickly relationship became apparent.

In fact, Stuart was quick to dismiss claims that Halfway was a hero in Afghanistan…

Ever since Halfway returned to Walford to be reunited with Whitney, he’s clearly been hiding something.

And now, we’re led to believe that he’s not the war hero Whitney thinks he is.

After hearing Mick describe how Halfway saved lives in the war zone, Stuart’s face turned cloudy and he quickly changed the subject.

Later, when they were alone, a drunken Stuart turned nasty, grabbing his brother’s arm and accusing him of lying. And Halfway didn’t deny it.

In an antagonistic mood, he confronted his little bro, saying: “I don’t reckon me and you are related. I never thought we were related.”

He continued: “You’re lying about what happened in Iraq. I know you boy, you’re lying. You ain’t a hero. What did you really do?”

So what really happened when Halfway was away?

Did he really take a “bullet in the bum” as Stuart joked? Or is he hiding a more tragic secret?