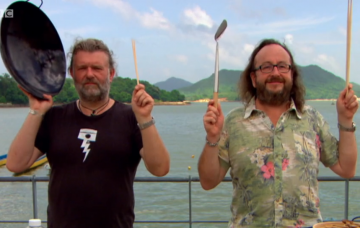 Hairy Biker Dave Myers has revealed how he could have lost his sight after mistaking the signs of glaucoma for a hangover.

The 61-year-old chef told Mirror Online he shrugged off concerns about the damaging eye condition during a routine appointment at the opticians seven years ago.

He believed he was suffering from vision problems after over-indulging the night before.

But thankfully his specialist ignored the biker’s scepticism and helped ensure Dave’s sight did not suffer with the condition which can cause blindness.

Dave explained: “I told her, ‘I don’t think so. I had a bit of a night last night. So I’ve probably just got a bad hangover.’

“But she took no notice and referred me to my GP who made a hospital appointment. And she’d been right.

“The first symptoms of glaucoma were setting in. I was devastated. If it hadn’t been spotted so early the result could have been catastrophic.”

Having feared it could end his TV career and passion for motorbikes, the star – who teams up with Si King as part of the Hairy Bikers telly duo – now urges people to avoid a similar diagnosis by having an annual eye check up and optician appointments every other year.

Calling glaucoma “the silent thief of sight”, the former Strictly Come Dancing contestant added the tests are painless and he uses eyedrops every night.

The Hairy Bikers are currently filming in Canada – a trip Dave says would not have been possible if his glaucoma had continued.

Dave and Si were last seen on TV screens together earlier this year in BBC2’s Hairy Bikers’ Mediterranean Adventure.

The pair met as production crew members in 1995 when they were both working on the set of TV drama The Gambling Man.