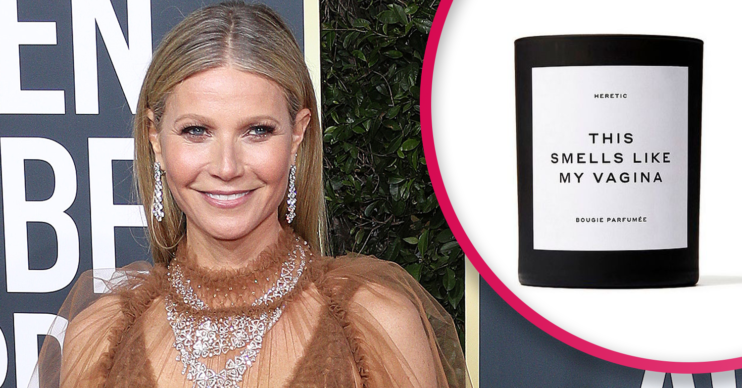 Gwyneth Paltrow sent shockwaves through the showbiz world earlier this year when she launched a candle that smelt of her vagina.

The “This Smells Like My Vagina” candle was was pretty much an instant sell-out.

Now, a member of Gwyneth’s staff has revealed how they actually got the candle to smell “authentic”.

Yes, Gwyneth made her staff smell her actual vagina while making the candle.

Gwyneth Paltrow and her saucy candle

For those interested, the candle/Gwyneth’s vagina is said to smell like geranium, citrusy bergamot, cedar, Damask rose and ambrette seed.

Read more: Katie Price reveals her feet ‘look like something out of a horror movie’

This Morning’s Holly Willoughby was among the stars who wanted to buy one!

He told Closer: “For the Goop team, smelling Gwyneth’s vagina became just another day at the office.

“She’s the ultimate embodiment of the brand, and that means ensuring its authenticity with the products.”

For the Goop team, smelling Gwyneth’s vagina became just another day at the office.

Launching the candle, Gwyneth declared that it was a “punk rock statement”.

She said: “Women have been taught to have a certain amount of shame about their body.

Read more: Ruth Langsford cries in the shower over death of her beloved sister Julia

“So if you just light a candle that says This Smells Like My Vagina and put it on the coffee table, it’s kind of a punk rock statement.”

Sex toys in the Goop office

The Goop office certainly sounds like a one-off place to work – to say the least.

Shaun added that staff can sometimes be found trying out sex toys in the office.

Hot on the heels of her vagina candle, Gwyneth has a newer saucy launch on her site.

The This Smells Like My Orgasm candle is currently on sale for a whopping £71 if you want your home to smell of Gwyneth’s sex life.

The blurb reads: “A fitting follow-up to that candle – you know the one – this blend is made with tart grapefruit, neroli, and ripe cassis berries blended with gunpowder tea and Turkish rose absolutes for a scent that’s sexy, surprising, and wildly addictive.”

For those who fancy a whiff of the original, you can still buy that online at Goop, too!

Will you be trying it? Tell us on our Facebook page @EntertainmentDailyFix.