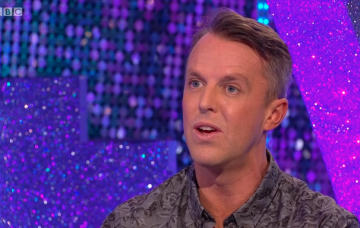 Former Strictly Come Dancing contestant Graeme Swann has spoken with Ashley Roberts to ensure there is no lingering bad feeling between them, according to a report.

Metro claims there is no hostility between the two celebrities after a comment made by Graeme following his elimination from the BBC show was taken as a ‘dig’ against his dance off rival.

The ex cricketer denied “tiresome” claims he took a swipe at the Pussycat Dolls star shortly after he became the ninth famous face to leave this year’s series.

The 39-year-old said about his departure: “Secretly I’ve had 25 years of ballroom experience but I kept that to myself! No, I was a novice coming into this.”

But Graeme has since repeatedly insisted his remarks were a joke, rather than pointed barbs aimed at longtime performer Ashley, partnered with Pasha Kovalev.

And now he has clarified there is no ongoing beef after suggesting Ashley already understood he was not slamming her vast experience as a dancer.

Reflecting on his statement, Graeme told Metro: “I rubbished that, I said don’t read the title or headlines. I didn’t say anything to anyone, it was a joke.”

Seemingly establishing a quiet word has been had, the dad of three added: “Yeah absolutely, but she realised it wasn’t [a swipe] as well.

“Unfortunately, people like to sell papers and make up headlines. It’s the way of the world, if only people were happy instead of trying to pick fights.

“There certainly isn’t any animosity between me and anyone.”

He previously dismissed the claims by emphasising how much he had enjoyed his overachieving stint on the show.

“I love everything about the show and everyone on it,” tweeted the popular sports star.

“My glorious adventure came to a natural happy ending and I have no bitterness in any way shape or form.”

Are you convinced? And even if Graeme didn’t mean his words to be interpreted that way, does he have a point anyway?

Please don’t believe any of the tiresome headlines about me having a ‘swipe’ at @ImAshleyRoberts or @bbcstrictly. I love everything about the show and everyone on it, my glorious adventure came to a natural happy ending and I have no bitterness in any way shape or form. 🕺🏼💃😁👍