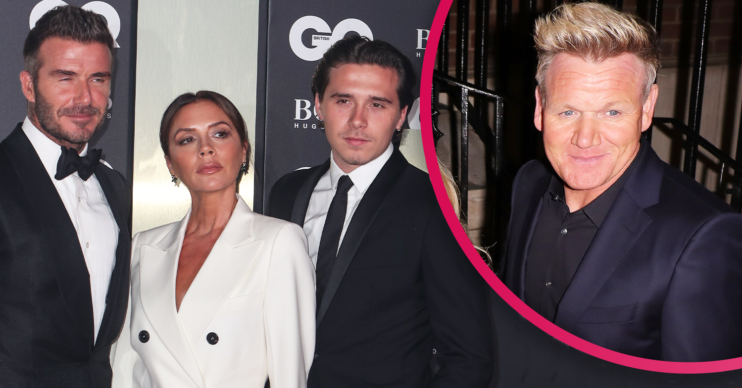 The chef and his family are close friends with the Beckhams

Family pal Gordon Ramsay is being lined up for a crucial function for Brooklyn Beckham‘s wedding.

The celebrity chef goes back a long way with David and Victoria – and their families have grown close, too.

And, according to a new report, that friendship could mean Gordon ensures the newlyweds dine finely on their big day.

It is claimed that Gordon is being eyed up to be in charge of food at Brooklyn and Nicola Peltz’s wedding reception.

A source told The Sun that Brooklyn is a confirmed fan of Gordon’s posh nosh.

They said: “David and Victoria want Gordon to oversee the food for Brooklyn’s wedding day.”

The source added: “The families are close pals and Brooklyn has previously raved about Gordon’ ­cuisine.”

They added: “He’s top choice to be the chef designing the menu.”

‘We’ve naturally got on’

Gordon previously revealed the Beckhams and the Ramsays have been on holiday together.

He also indicated he shares a similar work ethic to David and Victoria.

The F Word presenter said in 2017: “Over the past 10 years we’ve naturally got on. I see how hard David and Victoria work.

“But the connection is our ambition to get all eight children through school, college, university and then dust ourselves down, when the kids are in their 20s, as having been decent parents.”

He added: “That’s hard. We feed off each other.”

Gordon is also reported to have given David’s culinary skills – particularly when it comes to Christmas dinner – the thumbs up.

Brooklyn’s proud parents were quick to celebrate the announcement of their son’s engagement on social media earlier this month.

And David added: “Congratulations to these two beautiful people as they begin this exciting journey together.

“We are so so happy for you guys.”

Brooklyn, 21, hailed actress Nicola, 25, as his “soulmate” as he revealed their big news.

However, over the weekend, his ex Lexy Panterra is reported to have claimed Brooklyn is “too immature” to get married.