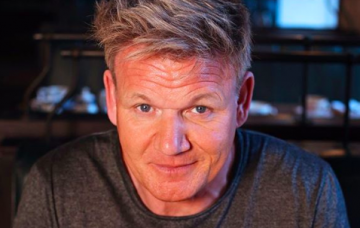 Pouting for the camera...

The family shared an adorable shot of the newborn to a dedicated Instagram account celebrating the Ramsay’s newest family member.

The sweet black and white image shows newborn Oscar pursing his lips with his eyes closed.

The account – which is being run by Matilda Ramsay – features an adorable collection of images from the first days of Oscar’s life.

The shots include Gordon carrying Oscar out of the hospital, the newborn snuggling in a much-too-big dressing gown after a bath, and his first trip to the beach.

Oscar is Gordon and Tana’s fifth child, and there’s a seventeen-year gap between him and his closest sibling, Matilda.

The couple have been open about their struggles to have children, due to the fact that Tana suffers from polycystic ovarian syndrome.

They turned to IVF during their fist attempts to conceive, and finally welcomed their first daughter, Megan, in 1998.

After another bout of IVF the pair had twins, Holly and Jack who are now 19.

In 2001 their fourth child, Matilda was born without the need for further IVF treatment.

Read more: Dame Joan Collins “lucky to be alive” after blaze at home

Oscar is a rainbow baby for the family, after Tana suffered a miscarriage in 2016.

Gordon announced his arrival with a post on Instagram, showing both parents looking ecstatic with their new son.

“After 3 BAFTAs and one Emmy… finally we have won an Oscar,” he said. Please welcome Oscar James Ramsay, who touched down at 12:58 today for some lunch!”

What do you think of the Ramsay’s new arrival? Share your thoughts with us on our Facebook page @EntertainmentDailyFix.