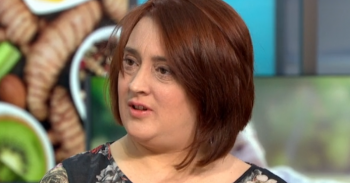 She says it's her decision until he's 18

Good Morning Britain viewers have blasted a mum who revealed she is raising her baby as a vegan.

Jess Pourasghar was joined on the show by TV presenter Sarah-Jane Honeywell, who is also a vegan, for a debate on imposing your dietary preferences on your children.

Sarah-Jane said she has allowed her own kids to decide how they eat, but Jess insisted she will enforce veganism on her son until he’s an adult.

Susanna Reid asked what her reaction would be if her son wanted some meat.

Jess told her: “Well I’d be disappointed obviously, I would tell him the truth about where it comes from.

“We’re going to be raising him to know exactly where it comes from and I’m not going to be showing him slaughter house videos obviously.

Susanna asked if she would actually prevent him from eating meat and the mum responded “absolutely” because it’s her choice.

When her son turns 18, she said, he will be able to make his own decision.

The show’s viewers took to Twitter to slam Jess’s decision.

One wrote: “Literally ridiculous this woman saying she’ll raise the baby until he’s 16 years old as a vegan… sucking up all that control are we??? Has she not seen About a Boy?”

Another tweeted: “Personally I don’t agree with forcing your child to be vegan, veganism is a lifestyle choice therefore I think it’s something they should choose for themselves as they get older.”

A third wrote: “@GMB mad it’s even being questioned whether or not babies should be raised vegan..they should not. They should not be forced down a certain path just because of the parents – it should be left until they can make the choice to be vegan. Nothing against vegans but it’s wrong. #GMB”

Someone else posted: “Babies being vegan?!?! I don’t think the baby wants to be vegan it should choose when it grows up. #GMB”

Literally ridiculous this woman saying she’ll raise the baby until he’s 16 year old as a vegan 🤯🤯 sucking up all that control are we??? Has she not seen About a Boy? #GMB

Personally I don't agree with forcing your child to be vegan, veganism is a lifestyle choice therfore I think it's something they should choose for themselves as they get older.#GMB

Babies being vegan?!?! I don't think the baby wants to be vegan it should choose when it grows up. #GMB

But not everyone was against the idea. One mum wrote on Twitter that her seven-year-old attended a vegan birthday party and didn’t know the difference.

#gmb our 7 yo recently attended a vegan birthday party and didn’t even notice (neither did his dad who happily tucked into the sarnies!)

Dr Hilary Jones was on hand to warn parents that, if raising a baby on a vegan diet, parents should be careful as it can impact on brain development.

He said that although it can lead to deficiencies, it is “perfectly possible” to get it right if you know how.

What’s your opinion on raising a child as a vegan? Leave us a comment on our Facebook page @EntertainmentDailyFix and let us know what you think!