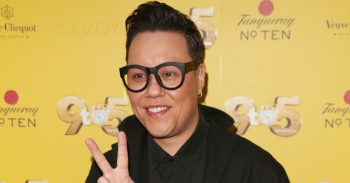 He speaks on his past anorexia battle to help others

Fashion guru Gok Wan has bravely opened up in a poignant message about his past struggle with anorexia.

The How To Look Good Naked star revealed that at the peak of his illness he would survive on just spoonfuls of honey a day.

The 44-year-old TV stylist, who suffered with the eating disorder when he was 21, lost 10 stone within a year after he began dangerously dieting.

He shared the truth behind his story on Instagram, in the hope of helping others. He captioned his post with: “For all the people who send me messages telling me they’re struggling with their self confidence. I hope this helps. Love you. 💖.”

He began his message with: “I was always a fat child. I had tried every diet but nothing ever stuck. But, at 21 I began a diet and within a year I had lost almost half my body weight. 10 stone.

“Honestly? It wasn’t a diet, I was starving myself, some days eating no more than a couple of teaspoons of honey.”

Recalling how bad things got, he continued: “One night I sat on my bed and stared at the mirror looking at my frail body. Skin was falling off my bones.”

In his candid message, Gok added that he wanted to “die” at one stage because he felt “ugly, fat and not good enough.”

For all the people who send me messages telling me they’re struggling with their self confidence. I hope this helps. Love you. 💖

Read more: Jade Goody’s sons to fundraise for Marie Curie on 10th anniversary of her death

Gok then urged those suffering in silence to seek help like he did.

He concluded by saying he hopes people can “talk more, listen more” and “admit” to the times when they are feeling “weak”.

Fans soon heaped praise on the star for his honest words and advice.

One fan wrote: “Thank you for having the courage to share your story. 💗.”

Another added: “You’re amazing @therealgokwan a true inspiration in making people feel better about themselves, thank you for this today 💕💕.”

A third told him: “You’re a strong and amazing man and a fantastic role model. 💖.”